Cadet First Class Nolan Bader is a student at the United States Air Force Academy (USAFA) pursuing a degree in Astronautical Engineering with a minor in French. It was actually through his degree in French that Nolan had the opportunity to come and spend a semester here at the Royal Military College of Canada. Being close neighbours, it is not a surprise that the American military and the Canadian Armed Forces have a lot of things in common!

However, there are some differences which are quite interesting. According to Nolan, he really enjoys the traditions and history at RMCC. He says that USAFA is still a very young academy and therefore has simply not had much opportunity to build old and heavily entrenches traditions. He also finds Canada’s relationship and allegiance to the Crown very interesting; Nolan has been having a great time experiencing the cultural and structural differences between the United States and Canada.

Nolan also said that he likes the Canadian military spirit; he finds that the Canadian military is always looking to do the best job possible and has a good sense of purpose. He also likes the bilingual aspect of the RMCC lifestyle and says that there is always a push at USAFA to introduce new language options such as Chinese and Farsi. Nolan said that life at the College is different than at the Academy but it amuses him to see how some things (such as joking complaints about minor issues) stay the same.

At USAFA most of the duties are attended to by the first years (fourth class); this difference (first years vs. fourth class) can cause some confusion when sharing information about RMCC and USAFA. At USAFA, duties for the fourth years are more optional and taken on when cadets choose to participate in clubs and teams. For example, Nolan is a member of the Soaring Program and is, therefore, down at the airfield several times a week.

According to Nolan, most of the their training takes place in the summer, just like RMCC. However, quite a few of the cadets train on saturdays during the school year – which can range from obstacle courses, combat exercises in the mock village on campus and by “SAMI’s” (Saturday AM Inspections).

First Year Orientation Period at USAFA is similar to FYOP at RMC. At USAFA, FYOP lasts the entire year and 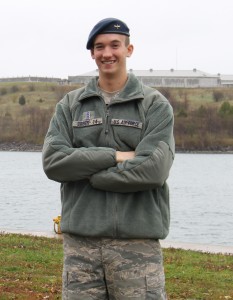 first years are expected to follow rules such as wearing their uniforms all the time, running on the borders of walkways and greeting everyone in the Academy. FYOP is very important at USAFA as well because each of the three academies (The United States Air Force, Military, and Naval Academies) takes pride in their specific FYOP periods and differences.

At the end of their FYOP period, USAFA has a ceremonial weekend called “Recognition” which is signifies the end of the period, like the RMCC Obstacle Course. The weekend begins on Thursday night with a squadron physical training session. Friday is taken up by courses such as: Shoots and Ladders which is a test of college knowledge, Academy Tour which involves a tour of the academy and history of the area, and Leadership Reaction which is a team building course. Saturday night consists of a harsh inspection by the fourth years followed by a run to “the Rock”. After reaching “the Rock” (an actual rock), the first years receive their “Props and Wings” and are full members of the academy.

While he has been here Nolan has played intramural hockey and even tried curling and bagpipes (for the first time ever). He is really enjoying the chance for a change in routine and is proud to represent USAFA here at RMCC. Nolan also commented on how he likes that even though there are rules that seemingly apply to everyone, first years are encouraged to skylark during the year and show their squadron spirit. 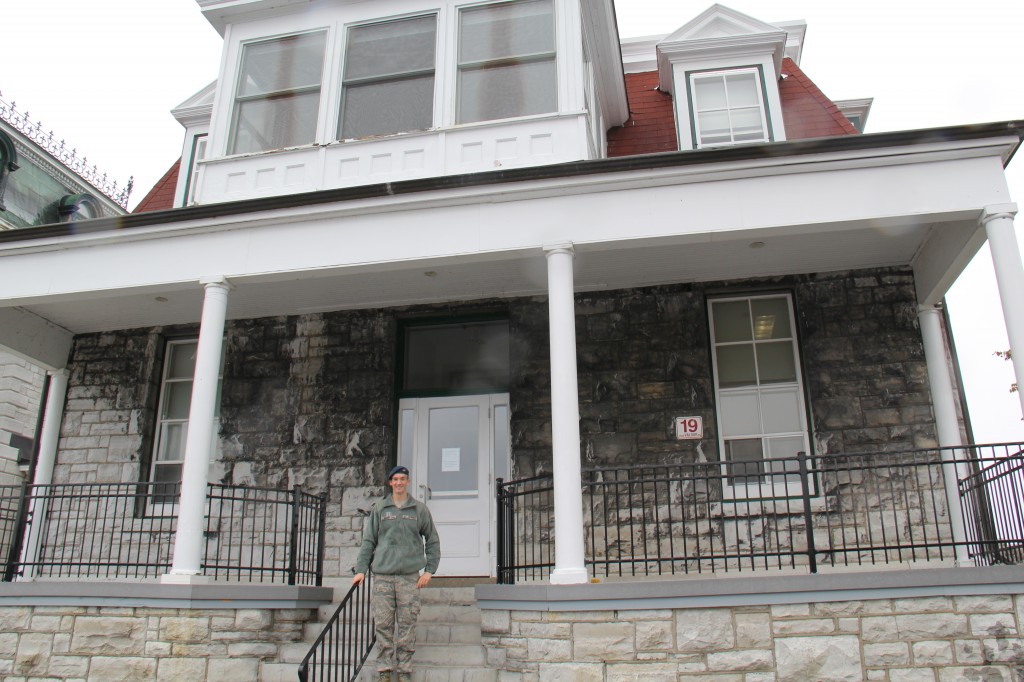 What does Nolan think of RMCC and Kingston? Nolan says the greatest thing about being in Canada is having the opportunity to see and do many new things; he has had the opportunity to visit many major cities such as Ottawa, Montreal and Quebec City. He liked visiting the civilization museums in each city and learning about the history of the major cities in Canada. He loved the beauty of Quebec City and, coming from the District of Columbia, he enjoyed the architecture of Ottawa and the presence of the Parliament Building.

Nolan commented on the beauty and age of the buildings on Campus and in town. He enjoys going on runs around Fort Henry and seeing all the history of the school, such as the history of the Arch and the War of 1812 in Kingston. He also enjoys how close the city is to the school as USAFA is a fair distance from the closest town.

Nolan genuinely appreciates the fact that so man people at RMCC are very hospitable and go the extra mile to ensure that he has every opportunity to gain the maximum experience out of his Exchange.

Thus far, Cadet First Class Nolan Bader, has had a great time at RMCC and is looking forward to expanding his horizons even more during his last few months in Canada.