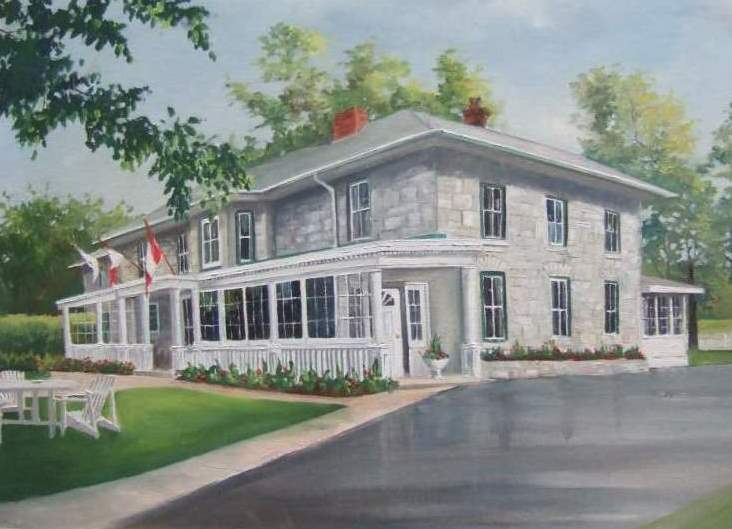 E3161 Victoria Edwards (RMC 2003) has been doing a series on the paintings of the Commandant’s residence in the private collections of the former Commandants for e-veritas, the alumni journal of the Royal Military Colleges of Canada. She connected with 4459 Commodore (Ret’d) Edward Murray OMM, CD, (RMC 1959), who served as the Commandant of RMC in 1987-91 and the Wilcox family.

e-veritas: Describe the painting of the Commandant’s residence in your collection.

4459 Commodore (Ret’d) Edward Murray OMM, CD, (RMC 1959): We have a beautiful oil painting done as a gift when I retired in 1991. The view is of the front of the building as seen from the driveway. It measures 22 by 27 inches. It was commissioned by the staff, and painted by Liz Wilcox (inserted photo left), a working professional artist in Halifax, who was commissioned to execute several works at the Royal Military College. Her husband is ex cadet 3335 Commander (Ret’d) Russell Wilcox (RRMC 1952) and her son is ex cadet 17411 Andrew Wilcox (RMC 1990).

e-veritas: I understand there was another commission of RMC buildings.

Russell Wilcox: Yes. My wife was commissioned in 1990 by Ed Murray to execute a 28 x 35 inch oil painting of the parade square with the Mackenzie and Currie buildings in the background. The painting was presented to Royal Roads Military College on the occasion of the College`s 50th anniversary. At the time, 8335 Colonel Claude JEC Naud CD (CMR/RMC 1970) was the commandant of RRMC. With the closure of RRMC in 1995, I wonder where that painting and plaque are today.

e-veritas: Describe the technical details of the commissions.

Russell Wilcox: My wife and I visited our son Andrew, who was a cadet at RMC at the time. While we were there Liz took photos of the Commandant`s residence and parade square for the two paintings.

Russell Wilcox: Liz is not a portrait painter, but uses figures in paintings to add interest or direct your eye to a particular spot.

e-veritas: Liz` commission at the Halifax wardroom was a real family affair.

Russell Wilcox: Yes. The Wardroom’s art collection includes two large murals, The Trafalgar and the Spanish Armada which hung in the Ballroom. Both murals were presented to the Wardroom in 1954 by the United Services Club of England and were transported to Canada aboard HMCS WARRIOR and hung in the then freshly opened Wardroom. In the 1980s, Liz was commissioned to execute a copy of the painting of the Trafalgar, so the original 8 foot by 17 foot painting could be sent to Ottawa for a thorough restoration. She painted four 8X4 panels and one 8X1 panel on the floor of the ballroom. Our sons Larry and David helped her to transfer her sketches from the original painting. Although I generally help with the framing, in this case the replacement painting was designed to fit in the original frame. Her copy of Trafalgar was ready for the change of command ceremony of Vice Admiral James C. Wood CMM, CD, Commander of Maritime Command, which was held in the Ballroom in 1983. In the end, a decision was made not to refurbish the Trafalgar painting at that time, so the original painting was rehung in the ballroom. I would love to know what happened to Liz` copy of the Trafalgar. [The Wardroom has recently contracted a conservator, Heidi Sobol to refurbish the Trafalgar in conjunction with the 60th anniversary of the Battle of the Atlantic and the opening of the new Wardroom. In addition, Tom Forestall was commissioned to paint a new mural depicting a RCN engagement during the Battle of the Atlantic between HMCS ASSINIBOINE and German U-boat U210] http://officersmess.psphalifax.ns.ca/Wardroom_Murals.htm]

e-veritas: What are you and your brother up to these days, Andrew?

17411 Andrew Wilcox (RMC 1990): I am President of a content management firm in Bedford, Nova Scotia responsible for the analysis, planning, building, and implementation of numerous large Enterprise Content Management Systems in both Canada and the United States. awilcox@everage.ca http://www.everage.ca/. I also maintain the website for Liz Wilcox Studios www.lizwilcox.ca/. My brother, Commander David Wilcox CD is currently serving in Ottawa as Maritime Command Surgeon and Director Maritime Health Services.