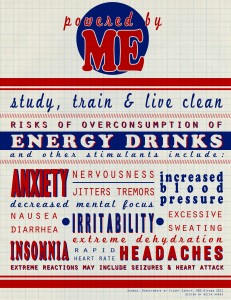 Energy Drink Health Concerns and the RMCC Campaign, “Powered By Me” 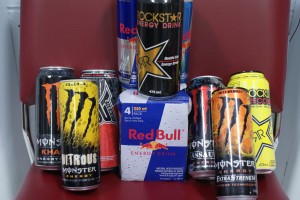 If you are in the Canadian Forces (CF), support the Forces or are a parent of a soldier, this interview will be of interest to you. In November the PE Manager, Kelly Lupton, and Varsity Fencing Coach, Patricia Howes, sat down with CFB Kingston Health Promotion Manager and Registered Dietitian, Nicole Houghtaling, to discuss our Department’s questions regarding energy drinks. Of particular interest were the negative health concerns in the news referencing the consumption of energy drinks AND the increased use of energy drinks by young adults for its alleged stimulant effect during busy study times and when mixed with alcohol during social times. Here is what we found out:

What is an “Energy Drink”? How does it differ from a “Sports Drink”?

Energy drinks and sports drinks are not created equal. Sports drinks are designed to re-hydrate the body. They replace energy (carbohydrate), electrolytes (like sodium and potassium), and fluids lost as a result of physical activity.

Energy drinks claim to boost energy and improve short-term mental concentration. These products contain caffeine and are too high in sugar to be used during exercise. Their use can actually increase risk of dehydration and should never be used in place of a sport drink.

Isn’t having a can of energy drink the same as having an extra-large coffee? Is the caffeine different somehow?

There have been a lot of news stories lately about the negative health effects of over consumption of energy drinks. What are the facts?

Many of the negative health effects are due to over-consumption of caffeine in energy drinks. Health Canada’s caffeine guidelines state healthy adults should be consuming less than 400 mg caffeine per day which is the equivalent of about 3 cups of brewed coffee. Unfortunately, energy drinks are only required to list added caffeine and not total caffeine content in the product. The actual caffeine content usually exceeds the recommendations for children and is excessive for those not used to regularly consuming caffeine. Side effects of caffeine intake include insomnia, headaches, irritability, increased blood pressure, nausea and anxiety.

Energy drinks also pack quite a punch when it comes to calories. Most energy drinks provide about 220-260 kcals per 473 mL. Drinking one energy drink a day above your caloric requirements could lead to weight gain of 23-27 lbs over a year! This can have a huge impact on your waistline and increase your risk of obesity, diabetes and heart disease.

What is the concern as it relates to mixing alcohol and energy drinks?

Alcohol is a depressant and energy drinks are stimulants. If a person over-consumes alcohol eventually they will pass out, but if they are mixing alcohol with energy drinks, the caffeine overcomes the sedating effects of alcohol and a person may perceive they are less intoxicated than they really are. Consequently we are seeing more cases of drinking and driving and alcohol poisoning, especially in the age group which is just starting to experiment with alcohol.

As RMC’s Health Promotion Team, are OCdts being educated about these concerns? What message are they getting from you?

At the moment we educate 1st year OCdts in their PE Nutrition Class on basic nutrition and how to fuel around physical activity. In light of recent concerns around energy drink overconsumption, we have added more information specifically on energy drinks. We also offer a nutrition course focused on sport/work performance called Top Fuel for Top Performance which OCdts can take as an Advanced Nutrition elective in 4th year. The Top Fuel for Top Performance program is also offered at every base and wing across Canada.

Is the increase in energy drink consumption simply an issue with RMCC students or is it a growing concern in the CF as a whole?

It is not only an issue for RMCC and the CF but also the entire Canadian population. Energy drinks are big business, 7 million energy drinks are sold every month in Canada and it is estimated that sales brought in $375 million in 2011. These products are very well marketed. Reports of health concerns have prompted some countries to ban energy drinks outright. I am doubtful this will happen in Canada but these reports are being monitored and taken seriously which is one reason why the regulations are being changed.

What is health Canada saying about the boom in energy drink popularity?

In October 2011, Health Canada’s Food Directorate Health Products and Food Branch submitted a proposed approach to manage caffeinated energy drinks. The new guidelines are expected to come into effect by mid-2013 or early 2014.

The biggest change is that energy drinks will be legislated as beverages and no longer as Natural Health Products. Some other key changes include:

What is your best advice to the student population during busy times when mid term exams and projects begin to pile on and there seems to be not enough time in the “awake” day to get things done?

That’s tough because so many demands and expectations are placed on RMCC OCdts in addition to what a regular college student would go through. First off, there is nothing that will replace healthy eating, adequate exercise and sleep! Learning how to increase mental fitness is imperative to success. For example, positive coping skills such as time-management, self-care and learning to prioritize, as well as, healthy lifestyle behaviours like getting enough vegetables and fruit, moderate alcohol intake and being nicotine-free will all help improve your mental fitness. Small changes can have a huge impact. I often hear students complain they do not have time for adequate sleep. Obviously there will be negative consequences to only getting 5-6 hours of sleep a night. Although it may not always be realistic to get a full 8 hours of rest, why not start by trying to get an extra 15-30 minutes a night? At least it’s a step in the right direction.

In an attempt to educate the students and staff at RMCC about the potential negative health effects of energy drink over-consumption, a poster campaign titled, “Powered by Me!” (en français c’est “Propulsé par moi!”) has been created by the RMC Athletic Department to bring awareness to these realities and celebrate that you can get through RMC without energy drinks . These posters will be distributed throughout the College over the month of January as a reminder of the concerns. There will also be some contests being run on campus throughout the term to help bring awareness and celebrate students that are consciously choosing to be “powered by themselves”. We want to pull back the “sexy” marketing of these drinks and educate people about the realities of their over-consumption on human physiology.

We are not the only people interested in bringing awareness to this topic. In a culture where energy drinks are extremely popular and are often primary sponsors, a group of snowboarders are trying to change culture too! Drink Water is a movement in action sports to respond to energy drink companies marketing to kids. They, too, are concerned with the push that energy drink companies have on society and are making a move to stop putting the “bad stuff” in their own bodies. Please feel free to check out their website! http://www.wedrinkwater.com/

If readers have any questions about energy drinks check out the links below, or feel free to contact the Health Promotion Office at the base nearest you. In Kingston the number is 613-541-5010 X 3992.

What’s in the Bottle? From Sports Drinks to Vitaminized Water

Information for Parents on Caffeine in Energy Drinks

The RMC Athletic Department would like to thank Becca Howes for the graphic design work for the poster.