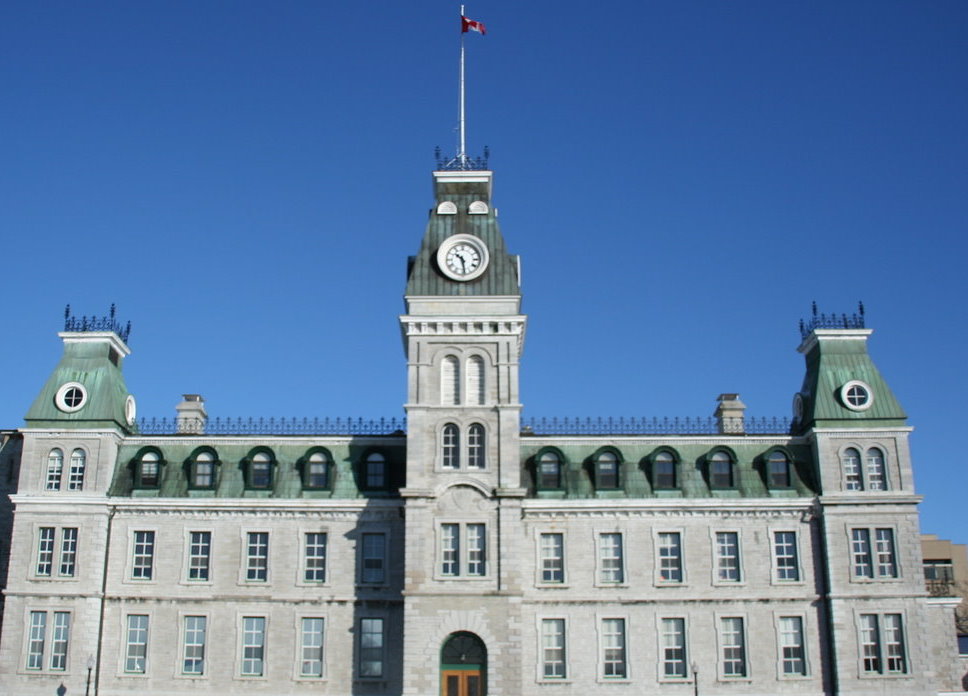 “–And Things that go Bump in the Night (or at least in the dark!)”

“There is nothing in the dark that isn’t there when the lights are on.”

Working in the old buildings at RMC, especially after hours, can certainly give one a creepy feeling. There are several accounts of unexplained noises, of rattling door knobs and heavy breathing that can be (if you are the rational type) written-off as merely the products of over active imaginations, but, imagine if you will, an object flying across a room; that’s something a bit more difficult to explain away! Recently there was just such an event in the Mackenzie Building. There were no rattling chains, no Jacob Marley, no three spirits; our Christmas ghost seems to be just a playful poltergeist. Here is a first-hand account of the incident–

“It was a Wednesday morning (25 November 2009), a morning just like every other work morning. I went up to my office located on the top floor of the Mackenzie Building and started my day. Around about 08:30 am I was in the women’s washroom, the one located on the middle top floor of Mackenzie. This washroom is small to say the least! It has no widows and no ventilation. Along one wall, just inside from the door, there is a metal paper towel dispenser, then the sink and then the toilet. A plastic bottle of liquid soap is kept on top of the paper towel dispenser. There I was, washing my hands, the door closed and locked (beside me) when the light suddenly went off and at the same time I heard something hit the floor behind me…I did not think much of it, I thought we had lost power. However, when I opened the door, needless to say, I was astonished to see that all the lights were still one and that we (the building) hadn’t lost power at all. Subsequently trying to rationalize this situation, I thought that the light bulb had burnt out, but with great surprise I discovered that the light bulb was fine. It was the light switch that had been turned-off! (And it isn’t the typical light switch that can easily be turned off!) I remembered the strange noise I heard when this occurred…I started to investigate the cause of this sound and found the bottle of soap, (that I had just put back on top of the paper towel dispenser), was now lying on the floor in the opposite corner of the room beside the garbage can*. I can not find any rational explanation for this event therefore I’ve concluded that one of the RMC ghosts was playing a joke on me.

As I was telling my story to one of my colleagues, she expressed surprise saying; “He doesn’t usually do anything in the mornings.” Anyhow, it made my day!”

* The narrator later stated that she did not bump into the towel dispenser in the dark. Even if she had bumped the dispenser, subsequent investigation showed that a good solid hit to its side would only rattle the plastic bottle on top; not knock it to the floor, let alone cause it to fly about 6 feet across the room to the opposite corner. (Assuming the soap bottle traveled in a straight line, it would have passed over the narrator’s head as she bent over the sink.)

Commandant Appreciation Day – an opportunity to recognize all of the staff’s hard work for the past year. 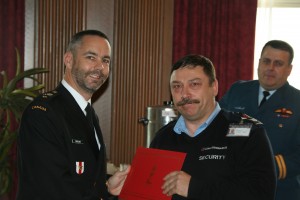 – Commissionaire Sergeant Richard W. Deacon is highly commended for his outstanding contributions to the successful implementation of the RMC Access Control project. In his capacity as Security Control System Administrator, his professionalism, dedication and ability to multi-task were instrumental to ensuring this critical security system became operational. His tireless efforts have been paramount to enhancing the safety and security of the RMC facilities and its personnel.

Special Ceremony Held at the Office of the Commandant

Recently, the commandant – Commodore Bill Truelove presented a Sacrifice Medal to Capt John Croucher. John is currently at student on the AMS course. The commandant was obviously touched by the occasion.  ” It was an honour to recognize John’s efforts and sacrifices while deployed in Afghanistan and those of his wife, Nikki, who supported him so very well during a very difficult time. We are immensely proud of John and all those who serve our country in very difficult circumstances every day, and their families!”

The press link that explains the details behind the awarding of this particular medal to Capt Coucher is Here. 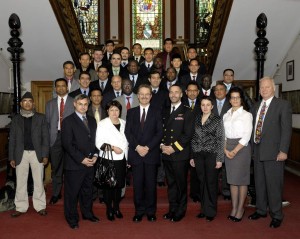 The picture shows the participants and staff of the 2009 Civil-Military Relations (CMR) Seminar on the Memorial Stairs of the Royal Military College and their hosts for the day; the Commandant, Cmdre Truelove, the Principal, Dr Joel Sokolsky, and the Director, Military Training and Cooperation, Mr Andrew Rasiulis.

The five-day Seminar is an element of Canada’s defence diplomacy. It offers invited senior military and civilian officials from around the world an overview of contemporary civil military relations, from both the Canadian and a global perspective. Issues in the fields of military operations, mission organization and administration, diplomacy, aid, and national and international politics, law, economics and social affairs are addressed. The format was chosen to promote understanding and to encourage sharing of knowledge, experience and opportunities during and after the Seminar.

The day in Kingston, 4 December, followed four in Ottawa where, in addition presentations discussions with invited Canadians, several participants and the Seminar Director, Dr David Harries, the group visited the Houses of Parliament with the help of the Honourable Peter Milliken’s staff, and the National War Museum to hear from the Director of Research, Dr Dean Oliver, and to tour several of the exhibits.

Many of the participants considered the ‘Kingston Day’ the programme highlight, in large part due to the warm welcome by the Commandant and the excellent presentation by the Principal on American CMR. Blessed, unlike last year, with fine weather, the trip to Kingston – through North Gower and Smiths Falls and then along Highway 15 – also gave the group a chance to see a little of Canada’s countryside.

At this time it is expected that the Seminar will again be held in 2010. Hopefully it will be as successful as was this year’s.