The Streetsville Pipes & Drums performed on Jul 01, 2010 at the Port Credit Canada Day Parade and at the Streetsville Cenotaph. On Jul 17, 2010, they will perform at the Orillia Scottish Festival. The Band is always open to adding new members, particularly if they already have some experience. The band generously supports the Cancer Treatment Unit at the Peel Regional Cancer Center and the Trillium Health Center.

6368 Judge Hugh Landerkin (CMR 1960) had a 20 year distinguished legal career at The Alberta Bar. He is past president of the Calgary Bar Association; a three term elected Bencher of the Law Society of Alberta, the ruling body for the legal profession in Alberta, and sat actively for twelve years in The Family and Youth Court Division of The Provincial Court of Alberta in Calgary. He is a past Chair of the Alberta Law Foundation, and was the founding president of the Canadian Research Institute for Law and the Family, a national family law think tank affiliated with the University of Calgary. He is one of only two Canadian judges to graduate from the University of Nevada, Reno, with a Master of Judicial Studies Degree, the only post-graduate program created solely for judges in the United States.

As a leading family law practitioner, he was an early proponent of what has now become to be called Alternative Dispute Resolution (ADR) being both an accredited arbitrator and trained mediator. His Master’s Thesis proposed a new model for custody dispute resolution in his court where trained judges would intervene, on a consensual basis, before trial, and work with the parties, using mediation techniques, to find solutions that would solve their family problems. He called this Judicial Dispute Resolution (JDR) and now JDR is part of the Canadian judge’s toolkit of skills and best practices.

He was appointed a Queen’s Counsel in Alberta in 1980, and received the Queen Elizabeth II Jubilee Medal and the Alberta Centennial Medal for distinguished service to the community.

He continues his studies and lecturing in conflict analysis and dispute resolution, employing both ADR and JDR methods, and has brought the quality of mindfulness to his thesis that the best conflict interveners are always recognized in their home communities as honourable citizens, possessing “presence” and “gravitas”.  Hugh.Landerkin@royalroads.ca 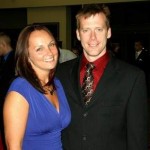 21295 Captain Brad Schur (RMC 1998) is the Division Admin Officer for DGAEPM in the Materiel Group in Ottawa. Brad Schur was the women’s basketball coach at RMC for the past eight seasons.

His wife 20994 Capt Nicole Schur (McNutt-Holland) (RRMC RMC 1998) is the ILSO 3-2, Project Management Office Maritime Helicopter Project, DGMPD (Air) in the Materiel Group in Ottawa filling a Regular force position. Nicole has been a Squadron Commander at the college the past couple of years filling a Reserve Force position.

With 35 years of experience in the Navy, RAdm Richard Greenwood filled numerous key roles including Project Manager of the Submarine Capability Life Extension Project and Director of Maritime Class Management, as well as Commanding Officer Fleet Maintenance Facility CAPE BRETON. He will be leaving Ottawa and moving to Washington to fill the appointment of Commander Canadian Defence Liaison Staff. 17936 LCol Scott Wilson (RMC 1991) is the Director of Staff, a member of the Directing Staff and Course Director for the Military Communications Systems (MCS) and Military Information Systems (MIS) courses in the Royal Military College of Canada`s Department of Applied Military Science (AMS). The Department of Applied Military Science’s primary purpose is to design and deliver Technical Staff programmes to produce educated and versatile Operational Capability Managers and Technical Warrant Officers; Officers and Non Commissioned Members with a broad-based knowledge of militarily relevant science and technology, defence management, a system engineering approach to capability development and critical thinking plus the ability to apply that knowledge to the needs of the Land Forces. Two technical staff programmes, the Land Force Technical Staff Programme (LFTSP serial 15) and the Army Technical Warrant Officer Programme (ATWOP serial 7) culminated recently with the department’s 15th Annual Project Symposium on 16-17 June 2010. The theme for this year’s Symposium was “Applying Afghanistan Experience to Land Operations 2021.” Keynote Speakers included MGen David A. Fraser (RMC 2001), who completed his Master’s in Defence Management and Policy from RMC in 2001 and H24263 Dr. John S. Cowan.  scott.wilson2@forces.gc.ca They had the opportunity to visit many of the cadets in the field and to participate in their training activities with them.

The RMC trio also had the opportunity to meet and chat with the staffs of the various schools to gain a better understanding of the courses, and the demands and challenges of each.

The commandant had this to say about the visit. “The Cadets are working hard and doing very well in their training while enjoying all that Gagetown has to offer – mosquitoes, dust and the occasional hike through the woods!! Morale was high amongst all we chatted with.”

This week the commandant and his staff are off to Borden to get perspective on the various courses that the cadets are attending there.