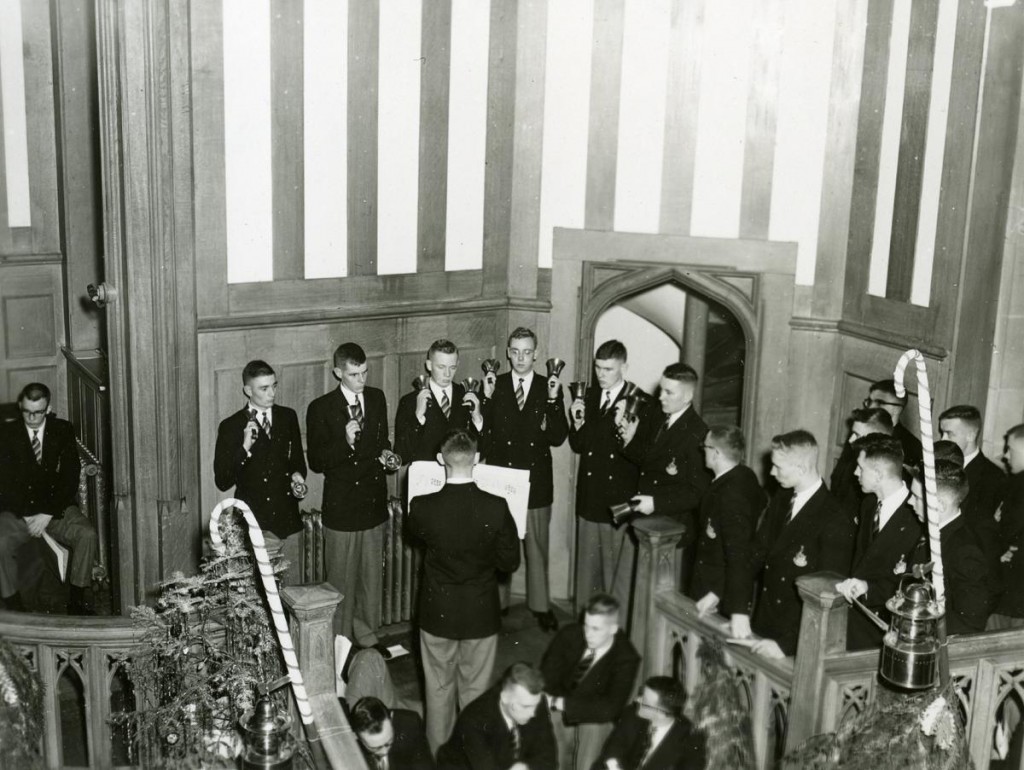 For Royal Roads cadets Christmas was synonymous with exams, the Christmas ball and leave to go home. Fitting in time to study was essential since passing (or failing) exams would decide whether or not a cadet would return to Royal Roads in January.

In addition to studying and the regular routine, cadets were responsible for planning and organizing the Christmas dinner and ball. This included decorating the quarterdeck and turning it into an elaborate winter wonderland. For many years a Christmas concert was also held in the Castle foyer, which included songs sung by the choir and selections by cadets playing the hand bells. 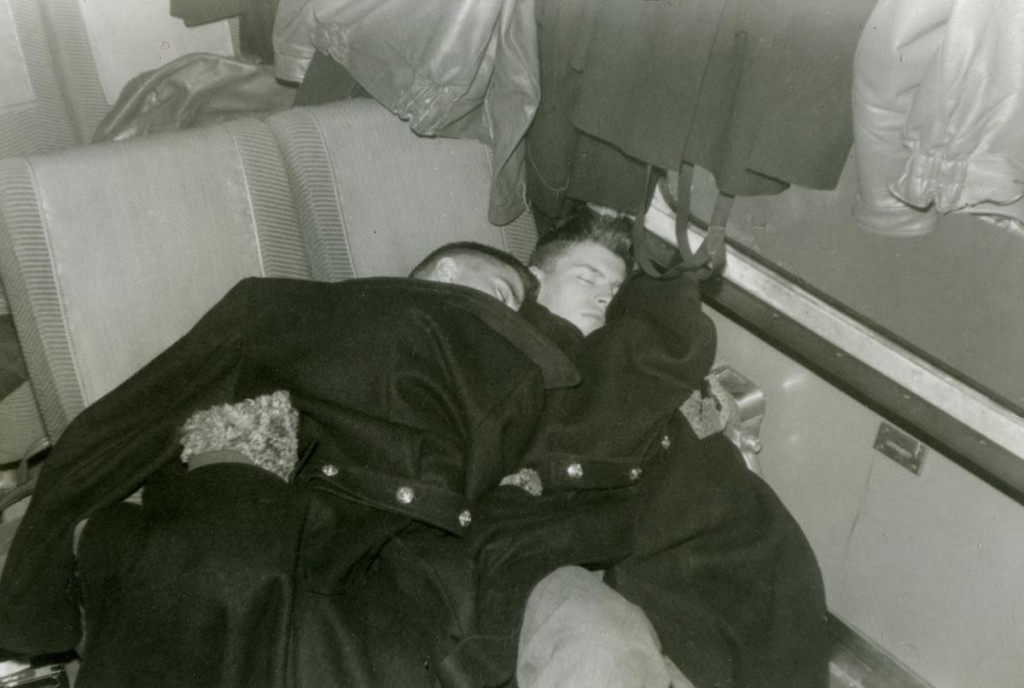 Cadets travelled home by train and then in later years by plane. Dave Wightman, 3334 (RRMC 1950-52, RMC 1952-54) recalls, “We went by train, those of us who lived in Eastern Canada. I had come from Toronto, and we worked a deal. Being officer cadets we were entitled to one round trip first class from Victoria to our home and back. Well we knew we were going to travel twice so we made a deal with the local CPR agent and we got two round trip coach class tickets for that, plus a few meal tickets left over. And so we’d get on this darned coach, and we’d fill the whole coach with people going home for Christmas holidays to Montreal or Winnipeg, Montreal, Toronto, even farther, and we just raised hell. We had a lot of fun on those train rides and I’m sure the CPR was glad to see the end of us!” 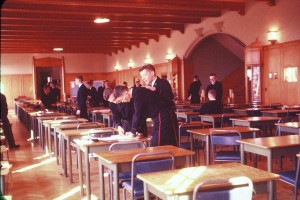 Monday, 24 September, 1956 – “Second week of classes. Most are counting time until Christmas.”

Saturday, 1 December, 1956 – “Another soccer game. Montgomery led a great chemistry discussion instead of a tutorial lecture.”

Sunday, 2 December, 1956 – “Wing Parade (plenty of charges were laid). Church was held at 1100 hrs. There was a Sunday afternoon period to catch up on running circles.”

Monday, 3 December, 1956 – “I’m getting very little studying done. Well, how will the Christmas exams be?”

Tuesday, 4 December, 1956 – “Choir practice on the Quarterdeck was led by Prof. Dutton. Once again a missed study period.”

Sunday, 16 December, 1956 – “No Wing Parade but there was Church Service. Studied Calculus and had a gab with others in Gil Mousseau’s room.” (Giles Moussea, 4947)

Monday, 17 December, 1956 – “Last exam – Calculus. In the afternoon we decorated for the dance. We had our Carol Service in the Castle in the evening.”

Tuesday, 18 December, 1956 – “Finished decorating in the morning. Took Jean xyz to the dance. She was the nicest yet! The dance was terrific.”

Sunday, 1 December, 1957 – “It was a usual morning. Reviewed the Circle Book. I prepared invitations to the Carol Service. Lastly, I did some homework.”

Monday, 2 December, 1956 – “No circle chits to enter. Had a good night of homework. Of course, everyone is looking forward to Christmas.”

Tuesday, 3 December, 1957 – “I phoned Mary Lou and ordered a large picture. I also bought her a bracelet. Is this proper?”

Thursday, 5 December, 1957 – “There were no rounds so I studied. Very few circles are being given.”

Friday, 6 December, 1957 – “We had an Army demonstration in the gym and then refreshments in the Wardroom. I then studied Chemistry.”

Saturday, 7 December, 1957 – “Chemistry exam in the morning. I studied in the afternoon and watched Perry Como in the evening.”

Wednesday, 11December, 1957 – “Descriptive Geometry was my worst exam so far. I taught Walt Cotie History in the evening.” (Walter Cotie, 4891)

Monday, 16 December, 1957 – “We wrote our last exam. The Carol Service was held in the Castle in the evening.”

Tuesday, 17 December, 1957 – “Mary Lou and I exchanged gifts and had a wonderful time at the Christmas Ball. Next term I’ll be CWS/L.”

Wednesday, 12 March, 1958 – “I found out the silly mistakes that I made in Descriptive Geometry at Christmas. They will not be repeated.” (I remember failing this exam. I was up until 0300 hrs doing a seating plan for our Christmas dinner and during the exam the next morning, I was so tired that I could not reason.)

What are your memories of Royal Roads coming up to Christmas?