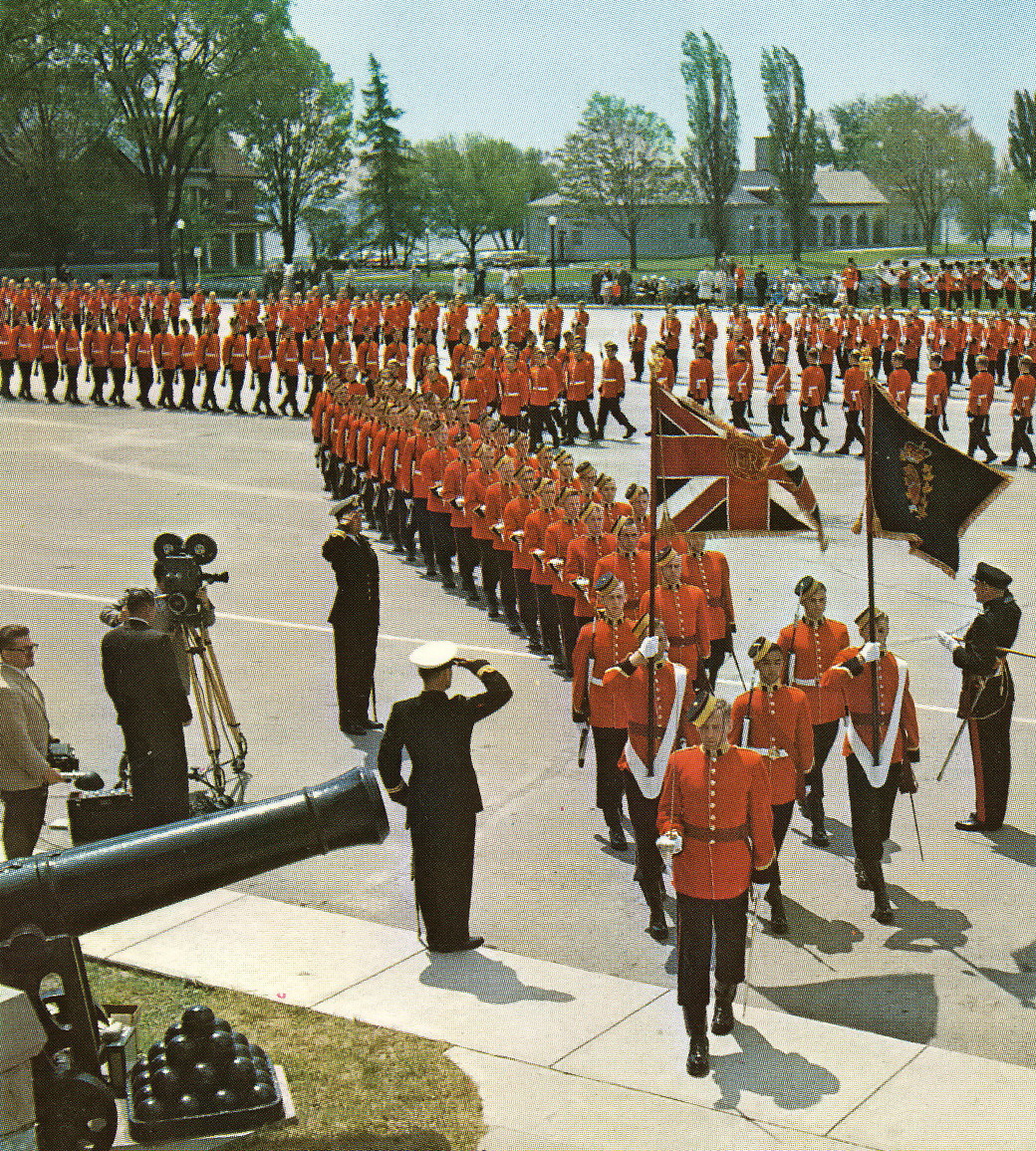 Our final year, 1960-61, was a very interesting one under the watchful eyes of our commandant, Brig. WAB Anderson and

our RSM, Cy Sininger. The cadets with ‘bars’ returned to the College in late August, two weeks before the recruits were to arrive to get ready for the new year. During this period, Mexico was celebrating an anniversary so the Canadian government sent a ‘platoon’ of our classmates under 5188 CSL John Lawson on a boon-doggle to Mexico City. They had a great time and were introduced to taquilla.

Our senior year was part of a brief experiment to try and replicate a Royal Roads-type situation at RMC. All the recruits and second year were housed in the Stone Frigate with a cadre of seniors as cadet officers under 5297 CSL Ralph Sykes. All the third and fourth year cadets were in Fort Lasalle and Fort Haldimand with each floor being a distinct flight. John Lawson lead the squadron in Lasalle and I was CSL for Haldimand. Each of these squadrons and flights had a cadre of seniors who were cadet officers. All cadet officer appointments were for the entire year. There were no third year cadets with ‘bars’. Each of the squadrons was assigned one regular force ex-cadet as a Squadron Commander. Our Squadron Commander in Haldimand was Capt. Ed Bobinski. The cadet officers ‘ran the show’ organising and implementing all aspects of College life except for academics and rep team sports.

The cadet wing was comprised of over 400 cadets and paraded every Sunday and at other times during the year so we were in great marching shape by the time graduation rolled around in the spring. The pipe band was an integral part of these parades. A few times during the year the cadet wing marched from the College into Kingston to attend church. On one such parade in 1961 we marched across the ice of Kingston harbour from the College to a landing near the current Holiday Inn. (The Wolfe Islander did not operate in the winter in those days.) 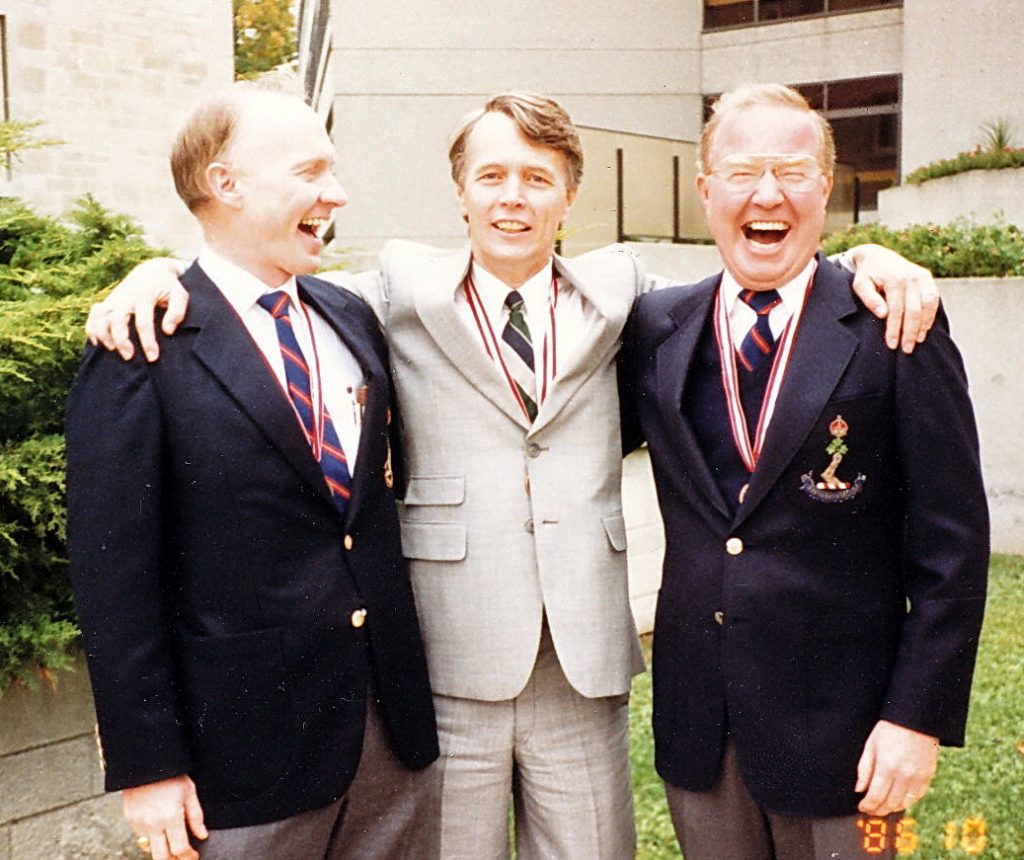 One of the major formal events of the year was the presentation of new Colours for the College during our graduation parade. The previous Colours had been laid up in St George’s Anglican Cathedral when the College closed in 1942. This was another opportunity to show our stuff on the parade square.

The meals in the Yeo Hall dining room were served. There was a ‘head table’ at the east end where all the CSLs and cadet wing headquarters cadets sat. On Sunday evenings, cadets could invite a guest for dinner in Yeo Hall. This was an inexpensive date as it cost only one taxi fare each way for your date.

Our time at RMC and the other Services Colleges ended with a great ‘high’. The month of May was full of fantastic parties. I do not recall who organised the parties but they did a great job. They even chartered the Wolfe Islander and we danced the night away on the deck. The weather was perfect for our graduation parade (under 5051 CWC Dick Byford) and festivities. Fitting for a perfect class! The reviewing officer for the graduation parade was Governor General Georges Vanier. For many of our classmates the pattern was: graduate, get married, have your first child (for most, in that order).

For those of us who were in engineering, ours was the last class to graduate without degrees. We had the hardship of having to attend a civilian university of our choice for one more year. I was at UBC with seven of our classmates – four in mechanical engineering and four of us in civil engineering. In 1994 the College decided to have a special convocation and grant degrees to all ex-cadets who did not have the opportunity to obtain a degree from RMC. I was proud to be granted a degree at the same time as my father 2191 Stuart Robb (1930 to 1934).

I selected the Royal Canadian Artillery as my post-College military service. [Those of us who selected the Artillery in the fall of 1957 had never been to Shilo. What a shock!] After three summers training in the Artillery School in Camp Shilo and after graduation I served with 4 RCHA in Camp Petawawa and with 2 Surface-to-Surface Missile Battery in Camp Shilo.

At the expiration of my minimum service requirement I left the CF as a captain and joined Canada Cement Company in Winnipeg, a company that soon after became Lafarge Canada. 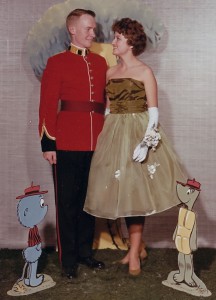 At the end of 35 invigorating years service in the cement manufacturing part of Lafarge I retired and settled in Kingston, Ontario with my wife of (now) 54 years, Mary Catherine. During my Lafarge career I served in Winnipeg, Belleville, Bath On, Kamloops, Woodstock On, Montreal, Paulding Ohio and Bucharest Romania. The career covered operations management and human resources management.