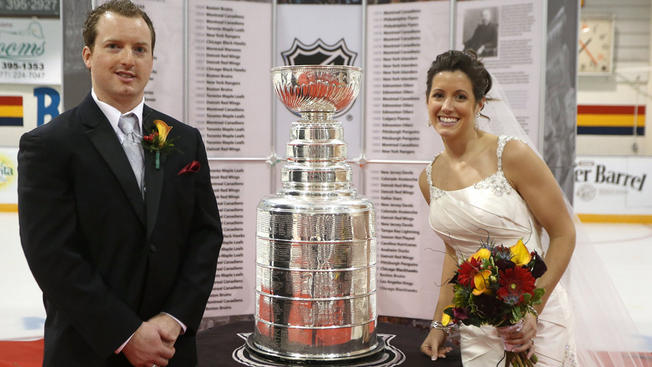 YOU MAY NOW KISS THE CUP

Groom 24063 David Thebault (Class of 2008) and his bride 24204 Beth Crosier pose for a picture with the Stanley Cup on their wedding day at the Stirling and District Recreation Centre during Kraft Hockeyville on September 14, 2013. Held every two years at the ExCel Centre in London, UK, DSEi is the world’s largest fully-integrated defence and security exhibition. This year’s exhibition featured the largest Canadian presence ever, with 17 Canadian industry exhibitors, representatives of 13 Government of Canada departments and agencies, and participants from 119 Canadian companies.

The DND/CAF delegation at the show included representatives from the Materiel Group, Royal Canadian Navy, Canadian Army, CANSOFCOM, Canadian Defence Liaison Staff (London), and the Canadian Military Delegation to NATO, as well as Canadian Defence Attaches based in Paris and the Hague (Netherlands).

Colt Hockey and partners Integran Technologies Inc. including 20089 Iain Brooks (Class of  1996) have developed a new high performance composite hockey stick enabled by a thin protective layer of ultrahigh strength, ductile metal designed to stop the stick from breaking. The technology was originally developed at Queen’s with some participation from RMC, and has since been successfully commercialized in the nuclear, aerospace, defense and sporting goods industries. The benefit for hockey is a light weight, high performance hockey stick that will last considerably longer than a carbon fibre stick.

The final product engineering is being supported by a Kickstarter campaign here:

We are pleased to announce the publication of a book, written by G4680 Jochen Wittmann (PG 2010) – lifetime member of the RMC Club – “Auftragstaktik” ( Miles-Verlag, Berlin in Aug 2012, ISBN 978-3-937885-58-2, also as eBook) attachis the foreword of MGen (ret.) Millotat, who was responsible for the German Army Regulation HDV 100/100 and former director education of German Fuehrungsakademie in Hamburg.

“From time to time, an extraordinary manuscript comes to my attention which warrants consideration for publication. In his paper, “Auftragstaktik”, i.e. , Mission- oriented Command and Control“:- “Just a command technique or the core pillar of mastering the military operational art?”, Lieutenant Colonel Dr. Jochen Wittmann, a reserve officer of the German Army, increases the cornerstone of the German military leadership philosophy in peace, war and in the international crisis management operations of our time , the “ Auftragstaktik”, in a broader perspective as a comprehensive leadership and management concept with its seemingly timeless tenets. He presents convincing arguments that “ Auftragstaktik”, originally developed by the Prussian-German General Staff System and modified for the Federal Armed Forces of today, is also very useful for the international business and administration.

In the German Army Command and Control Regulation HDv 100/100 of 2000, I was responsible for, I characterized “Auftragstaktik” as follows:

“Auftragstaktik is the supreme command and control principle in the Army. It is based on mutual trust and demands of each soldier, in addition to conscientious performance of duty and willingness to achieve the objectives ordered that he is prepared to accept responsibility, to co-operate and to act independently and resourcefully in accordance with the overall mission. The commander informs his subordinates of his intent, sets clear, achievable objectives and provides the assets required. He only specifies details on how the mission should be executed if measures serving the same objective have to be co-ordinated or if political or military requirements so demand. He grants subordinate commanders freedom in the way they execute the mission. This is a prerequisite for taking quick, decisive action and serves to strengthen the sense of personal responsibility. Military leaders are educated to utilise this latitude. The style of leadership and supervision must take this into account. Auftragstaktik presupposes that a superior is willing to accept the occurrence of mistakes in the execution of the mission. Such tolerance, however, has its limits where the accomplishment of the mission and the lives of soldiers are unnecessarily put at risk.”

And I formulated the required leadership qualities of a commander who successfully practices Auftragstaktik based on an axiom of the Prussian- German military culture as follows:

“Fortune favours the brave, and success usually goes to the one who is creative, yet straightforward, bold and quick, yet prudent in deciding on a course of action and enforces his decisions with tenacity and appropriate toughness even against resistance. Commanders who wait for orders cannot exploit favourable opportunities.

Indecision and hesitation tend to be more harmful than resorting to the wrong expedient.”

Auftragstaktik grants commanders at all levels a maximum of freedom of action. The other services also command and control on this bases. In the armed forces of German´s allies, the beginnings of Auftragstaktik are recognizable. Many allied armed forces have tried to introduce Auftragstaktik based on the German experience and adopted it to their specific military cultures. Misinterpretation and misunderstanding, however, very often accompanied this attempt and process, and the intent to use Auftragstaktik very often degenerated to a lip service.

Lieutenant Colonel Wittmann identifies a broad variety of definitions of Auftragstaktik in his literature analysis. Since Auftragstaktik lacks from theoretical foundation, he tries to ground it theoretically in an interesting and convincing manner.

His work has, undoubtedly, extraordinary relevance to the present and future dimensions of leadership in the multinational structured armed forces of today, but also in areas outside of the military sphere. ”

For more info contact: Jochen Wittmann [drjochenwittmann@web.de] or the publisher

e-mail: xx miles-verlag@t-online.de  – The book is available from amazon.ca, barnes&nobles and similar services and naturally written in English!