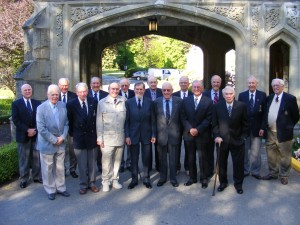 On May 29th the class of 1947-49 celebrated their 60th class reunion in the drawing room of Hatley Castle. Although 62 years had passed since first entering Royal Roads, everybody remembered their time here and described it as a defining experience in their life. This unique term joined in the only year of the RCN-RCAF College at Royal Roads. The following information about the class was told to Royal Roads University staff person, Karen Inkster by Pat Higgs, RRA 15 and was also taken from the Log books from 1947 through 1949.

In the absence of an air force college, the RCAF decided to utilize the Royal Roads facility prior to the reopening of RMC. Capt (N) Creery, Commanding Officer of HMCS Royal Roads described the reasons behind this decision in the 1947 Log Book:

“With the cessation of the Empire Air Training plan inaugurated during the war, the system of training officer entries to the R.C.A.F. came under revision and, true to the modern spirit of amalgamation, the authorities concerned investigated the possibilities of combining the training of Naval and R.C.A.F. Cadets at one College. On the one hand training in a combined College should prove more economical than establishing a separate R.C.A.F. training system, since accommodations is available in the existing Naval College and only minor constructional changes and additions would be necessary; the existing maintenance staff would suffice and the instructional staff would require but a slight increase. On the other hand, the combination would be in line with modern thought; it would get the future naval and air force officers together during their initial training period, and this should lead to a common understanding between them which would be an invaluable asset to the co-ordinators and participants of the combined operations of the future.”

Accordingly applicants were solicited from across Canada and 34 air force cadets (6 of whom were serving airmen in the RCAF) were selected from approximately 450 applications. The Navy continued to recruit cadets, of which there were 27 that year.

It cost $800 a year to attend the college, which was a lot of money at the time. Some of the term were on scholarships, but the majority had to pay by their own means. Rules were very strict at the college. In the first year they were allowed to go out until 9 pm on Saturday night, and in the 2nd year they could stay out until midnight. Throughout the two years that the Class of 1949 was at Royal Roads their curricula followed applied science and arts disciplines – everything had an application to the military. The air force cadets followed the traditions of their parent service in terms of discipline and parades and the navy cadets followed the same process that had been laid down when the Naval College was opened in 1942. This meant that two different drills were used at the college – air force and navy – each starting on a different foot! The RCAF cadets wore the same uniforms as the Royal Air Force College, Cranwell and the navy cadets wore the same uniform as the RCN cadets, which were modeled along the same lines as the Royal Naval College at Dartmouth.

In 1948 the air force cadets were taken on a tour of Canada and received three months of flight training at RCAF station, Trenton. The navy cadets went to sea with the RCN. Mr. Higgs recalls, “We blended together in flights but as far as military was concerned, we maintained the distinctiveness of our service affiliation with pride. There was a spirited camaraderie and a bit of competition between us.”

In the fall of 1948 the army arrived at Royal Roads and the tri-service concept was completed. The senior class, however, maintained their separate uniforms until the end of their time at Royal Roads. The air force cadets of the 1949 graduating class proceeded to Officers Manning Depot in Toronto and were processed for air crew and ground appointments as flight cadets. Following this training, those cadets joined the regular force in 1950. Some proceeded on to careers as pilots, navigators, radio officers and supply officers in the RCAF. The remainder attended university to attain degree status for subsequent employment as technical officers. Those cadets that didn’t elect to join the regular force proceeded on to university. Likewise, the navy cadets who elected to join the RCM regular force followed midshipman training with the RCN and Royal Navy. Those who elected not to join the RCN proceeded on to university.

It is significant to note that of the air force term, Cadet Wing Commander Ken Lewis, RRA 18, later commanded the Air Force as a 3 star general (he was also commandant of Royal Roads from 1968-70) and Hy Carswell, RRA 03, became Associate Deputy Minister of Personnel of DND as a Lieutenant-General. In addition, Pat Maxwell, RRA 23, was a Brigadier-General in the supply branch of the Canadian Forces and Barry Howard, RRA 15, was a Brigadier-General commanding the Air Force Reserve in Toronto. Among the navy cadets, Ray Ross, RCNC 336, attained the rank of Commodore and Richmond Kirby, RCNC 327, and Keith Young, RCNC 342, both attained the rank of Captain (N). Several of those who were civilians became tenured professors – Howard Witt, RRA 34, was the Head of Engineering at the University of Michigan and Jim Prentice, RCNC 334, was a noted physics professor at the University of Toronto. 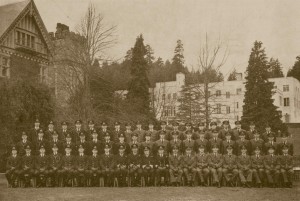 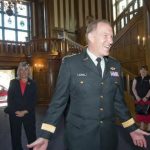 “I’m the leader I am because of Royal Roads — this is where I started,”

12320 Gen. Walter J Natynczyk (RRMC CMR 1979), Chief of the Defence Staff spoke to faculty, students and military personnel at Royal Roads University about the mission in Afghanistan, a Canadian Forces recruitment drive and plans to acquire new military equipment. Royal Roads University made Natynczyk a member of its Fellows Council. He is a graduate of Royal Roads Military College. “I’m the leader I am because of Royal Roads — this is where I started,” said Natynczyk. But he joked that he noticed a few changes in the community, particularly the loss of the Colwood Inn, in which he’d poured a “significant investment” as a student. He renewed memories with a of tour Royal Roads University.    Source