As Maximus Decimus Meridius said in Gladiator, “What we do in life echoes in eternity.” With that in mind, RMC cadets charged onto the intramural fields with squadron pride in their hearts, testosterone in their veins, and 241 pizza in their stomachs.

On the soccer pitch, cadets battle not only each other, but the strong eastwardly winds and the icy rain for the coveted Navy Bay Premier League Championship. Leading the way in the standings is the undefeated squad from Wolfe squadron with a record of 4-0-1.
In the RMC aquatic center, the duel in the pool rages on. Cadets that know how to swim without water wings don their stylish military issued bathing suits in the fabulous game of water polo. Verchères squadron has established their naval dominance early on with a 5-1 record, while Montcalm seems to be going the way of the Titanic with a shaky 0-4 start.

For the Birkenstock wearing, visor sporting, Jack Johnson loving cadets who enjoy chillin’ with the bros, this Fall’s ultimate season has been the gnarliest yet. The bros from Wolfe squadron, led by III Seung Bro Yoon 24822, are totally awesome this year with a 5-1 record. Montcalm squadron seems to have decided to bro-out rather than actually play the game, as they have a 0-4 record early in the season.

The cadets who were too slow to sign up for ice hockey or the ones that can’t skate have enjoyed the addition of the boards in the field house for ball hockey. The addition of the boards has cut down the time spent chasing after balls by 87.6% and has amplified the intensity by a factor of 3. LaSalle squadron is quite good at putting the little orange ball into the net, starting off with an undefeated record of 4-0, proving that they truly might be #1 in the college at putting little orange balls into nets. The beavers from Cartier squadron need to stop chewing on their sticks as they started off the season with a winless record of 0-3-1.

On the pond, a complete restructuring of the ice hockey league has taken place. This year, since the college has switched to 3 divisions, the two-tiered system was impractical. Instead, the league is now comprised of 6 equal teams (2 per division). Despite the initial dislike of the new system, under the supervision of league convener III Baxter Attlebery 25054, the league is running smoothly. A Div, led by IV Paul Mayne 24518, is on top again this semester with a strong 4-0 record. Hopefully they can keep it together in the playoffs this year.
In only its second year, the new Sandhurst intramural provides a niche for those cadets too lazy to take off their combats after class.

Combining running, wall climbing, assault boating, first aid, shooting, moustache growing, Sandhurst IM is for all those who actually miss the Mega. All 6 teams will participate in different competitions throughout the season, culminating in a final challenge in November, along with a guest team from CMR-Saint Jean. After the Range Competition, A Div is proving to be the team to beat this year. This is a great training opportunity for those cadets who wish to become part of the real Sandhurst team and obtain true star status, for a chance to bring home 1st place for the second year in a row.

Overall, intramurals this semester are running like a freshly oiled cog in the machine that is the athletics department. Big ups to IV Jeff Phillips, the CWIMO, and to all the SPOROS for all their hard work so far. Four weeks still remain until playoffs, and as any sports fan would know, nobody knows how the cookie will crumble. Good luck to all the teams, and always remember, as a famous athlete once said: “Whoever said it doesn’t matter whether you win or lose….probably lost.”

Special Thanks to III Lystiuk and III Stokes for checking my slleping. 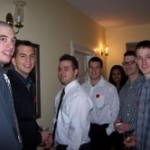 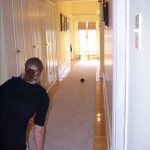 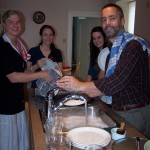 Trick or Treat; Bowling; KP Duties – All in a RMC Weekend

It was another busy weekend around the commandant residence!

On Friday, while the Commodore and his wife, Brenda were enjoying a wonderful evening where he was the key note Speaker, with the RMC Club of Kingston Branch, at their annual black tie dinner – the 4th year class was celebrating 200 days to Grad.

The hosting responsibilities were left to daughters, Ashley and Tina as a large contingent of the soon-to-be graduates dropped by “the residence” in what could best be described in unique and creative costumes.

The report from Ashley and Tina, were that while “all the costumes were terrific”, their nods went to the ‘The Green Army Men’ and the “Neon Aerobic Team” – Well done!!

On Saturday, the 196 year Commandant’s House had a few more visitors in costume out in search of some treats. Word has it that the treats were plentiful while the tricks were few and far between.

The undisputed high-light of the weekend, however, was another fun brunch at the “residence” where the cadets discovered the “bowling alley” while some of guests along with the Commodore and Brenda were elbows deep in dishwater.

The kitchen help was certainly appreciated by the hosts which allowed them time to get over to the field house to see the Fencing tournament they were later noticed in the crowd during the men’s soccer game.

Another great weekend on the Peninsula for both the Cadets and the Truelove family!!!

What the Cadets Had to Say:

This morning, a collection of cadets woke up, put on our Sunday finest and were welcomed into Commodore Truelove’s home, the house that RMC Commandants have lived in for over a century. Despite the jackets and ties some of us had brought, it was an informal brunch. The only demands placed on us were a photo and to finish the food. Having just celebrated 200 Days To Grad this past Friday with my fellow Fourth Years, the morning was also a reminder of the ever shortening time that we will spend together here at RMC. I am confident, however, that not only will our remaining days here on the peninsula be as rewarding as the first three years, but that those after graduation will continue in the same vein. I’d like to thank the Commandant for the brunch, once again, and for his efforts for the College, which continues to be a place for young Canadians to learn how to lead.

I would to thank the Commandant for the wonderful brunch today. It was a wonderful chance to see one of the most mysterious buildings on the campus and talk with a high member of staff. The house is truly beautiful and a tribute to the history of the campus. The food was excellent and it was made even more so because the Cmdt prepared it.

Again, thank you very much for a superbly enjoyable afternoon of food, fellowship, exploration (and a few rounds of bowling). It was a wonderful experience and a great memory.

Today, the Commandant of the RMC, Commodore Truelove and his wife Brenda invited several cadets to their home for a brunch. The purpose of this brunch was to allow the cadets to see the Commandant’s house and for cadets of different years in different squadrons to interact with each other. As Commodore Truelove said, the relationships that the cadets build today at RMC are going to be incredibly useful throughout their future careers. The Commodore and his wife cooked a delicious meal for the cadets and the only stipulations were that each cadet had to sign the guest book and not feed the dog. Overall the atmosphere was relaxed and the cadets enjoyed the opportunity to look around the house.

Anonymous cadet who does not want his name to be written…
The Commandant hosting us for brunch was a great experience. We got to know him, his wife, and his daughter better than we had ever before. The environment was relaxed and encouraged exchanges between everyone present and the making of new connections. We also had the privilege to visit the Commandants house and even play bowling on its second floor’s hallway! I would certainly go again if invited, but I’ve unfortunately already had my chance. I encourage all cadets to volunteer for the next planned brunches if spots are still available. Big thank you to the Commandant and his family!