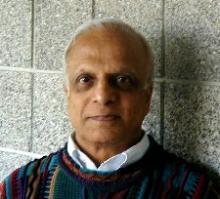 e-veritas: I understand that Rang is your nickname and Subramanian isn’t even your first name?

Rang Ranganathan: My full name is Subramanian Ranganathan – I never use “Subramanian” except in legal documents – It is not even my first name.  Actually it is my father’s first name, my given name is Ranganathan and I do not have a last name.  That is the way the name flows from generation to generation in my family tree.  This is very common in the part of India I come from.  But since I need a First and last name in US/Canada, I chose to go this way.

e-veritas: How did you come to study theoretical physics? Any highlights?

Rang Ranganathan: Early on in High school, Physics held a fascination for me, probably because everything in the Universe can be explained through Physics.  I never developed the patience for experimental \physics and since I liked Mathematics too, it was theoretical Physics for me.  My school education was in Delhi, India and I got my BSc (Hons) and MSc in Physics from Delhi University. Cornell University asked me delay my start by one year so that they could award me a full research scholarship and so I went and got another degree. I earned my Ph.D. at Cornell University in theoretical physics in 1967.

e-veritas: How did you land at RMC?

Rang Ranganathan: That is interesting. Dr. Noel Pope had just moved from Atomic Energy of Canada, Chalk River to RMC as the Head of the Department of Mathematics.  Our research interests overlapped a great deal.  I went to the American Physical Society meeting in NYC in 1967 to present a paper and after my presentation, he came to talk to me and then offered me the job to come to RMC to work with him. The rest, as they say, is history.

e-veritas: When were you on RMC staff? Any non-teaching positions?

Rang Ranganathan: I joined the RMC faculty in 1968 as a Professor in the Dept of Mathematics.  I served between 1985 and 1994 as Head of the Department of Mathematics and Computer Science. From the beginning of the programs in the 1950′s and 1960′s, many of the more theoretical of the physics courses in the Honours Mathematics and Physics and Engineering Physics programs had been given by the Department of Mathematics, and I taught courses in Classical Mechanics and Quantum Mechanics, in addition to Applied Mathematics courses.  Later, I was a Professor in the Dept of Physics. I played an early and significant role in the development and implementation of space studies at RMC (the process was initiated by A112 Dr David Baird, the then Dean of Science) and served as Director of Centre for Space Research from 1995 to 1999.  I taught all four undergrad years and Graduate courses in Applied Maths, Theoretical Physics, and Space Science. In addition to the two Administrative positions listed, I also served as the Director of Research Administration, and Chair of Research Ethics Board. I was asked by the then Principal, H24263 Dr. John Cowan to serve almost two years as the Dean of Science. Since retiring in 2009, I have been a Professor emeritus.

e-veritas: You were the first Director of the Centre for Space Research in 1995

Rang Ranganathan: This was initiated by 5992 Dr. Jim Barrett (CMR RMC 1964), the then Dean of Science. Since 1993, I had served as the College’s contact person with DND’s Directorate of Space Development. I was the founding Director of the Centre for Space Research in 1995 till 1999. With a mandate covering both space research and space education, the Centre for Space Research’s purpose was to coordinate all space-related activities and to provide liaison with space-related agencies both within DND and in the wider community. The members of its Executive Committee were drawn from a variety of departments in science and engineering at RMC and with outside representation. As part of that mandate, I negotiated a Faculty Exchange program between RMC and the United States Air Force Academy in Colorado Springs, but it fell through, at the last stage, due to lack of funding commitment on our side.

e-veritas: How did the closing of two out of three Canadian military colleges impact you?

Rang Ranganathan: I was a long-serving senior member of RMC’s Department of Mathematics and Computer Science when downsizing of that department caused my move to the Physics Department. Though closing two out of three colleges had provided some savings, further reductions in staffing at RMC led to the loss of two positions within each of the three departments in the Division of Science. The Department of Mathematics and Computing Science similarly lost two positions, but since no member of that department was ready to retire, two members took transfers; I transferred to physics and one colleague transferred to chemistry.

e-veritas: What were your positions, other than at RMC?

Rang Ranganathan: RMC was my first job and my only one and my last.  My research has taken me to many places and I have spent my sabbaticals at MIT, CALTECH, Australian National University and Australian Defence Force Academy.  I was also selected to attend the National Defence College course in 1990.

e-veritas: What are your research interests?

Rang Ranganathan: Before joining the Department of Physics, my research had been in the area of dynamics and transport properties of dense fluids. I had studied atomic motions in classical fluids in a variety of systems ranging from simple monatomic fluids to plasmas and liquid metals. This work continued after joining the Department of Physics. For many years I participated in the Physics department’s extensive work in theoretical physics, specializing in the theory of condensed matter physics. My research included exact theoretical formulations of time correlation functions, and molecular dynamics simulations of a number of atomic systems.  I published a large number of papers in this area.

e-veritas: You have said that research makes you a better teacher.

Rang Ranganathan: There are synergies that could be exploited.  Research broadens your knowledge base considerably and you can use the expanded base in teaching to draw on to make the subject more relevant.  Many “what if” research scenarios can be used effectively in teaching methods. When your approach works or does not work in research, you ask the question “why” and try to find the answers.  This approach leads you to critical thinking and this is what you want to impart in teaching.

e-veritas: I understand that three astronauts were your former students at RMC.

Rang Ranganathan: It was a pleasure teaching at RMC. The class sizes and the dedication of the OCdts made it possible for me to know them personally and for the students to come to know me personally.  Many of the thousands of students I have taught over the years have gone on to serve our country with distinction.  All three astronauts, 8276 Doctor Marc Garneau (CMR RMC 1970), 13738 Colonel (Ret’d) Chris Hadfield (RRMC RMC1982) and 21364 LCol Jeremy Hansen (RMC 1999) were my former students.  Chris invited me to one of his space launches at Kennedy Space Center and gave my wife and me an insider tour of the Houston NASA Space Center.

Rang Ranganathan: My wife and I now live in Ottawa, after 43 years in Kingston. DND has permeated my family. My daughter, Shoba is with the CF Health Services Group as Chief Quality and Patient Safety Officer.  My son-in law 21736 Major Adam Bruce (RMC 2000) is now a CF Lawyer in the JAG’s Office. We are involved in taking care of our two grand kids, Shaun and Alisha, aged 10 and 7.  We travel quite a lot, often with the grand kids.