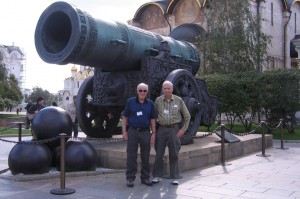 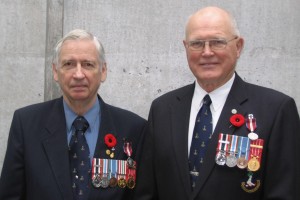 Photo (L) – 4873 Col (Rtd) Bob Brett and 4804 LCol(Rdt) Neil Johnstone, both of the Class of ‘60 visited Russia during September of this year. While in Moscow they visited the Kremlin and had their photo taken in front of the Tsar’s Cannon, purported to be the largest in the world.

Photo (R) –4804 LCol (Rtd) Neil Johnstone, Class of ‘60, and 6171 Maj (Rtd) Brian Earl, Class of ‘64, recipients of the Queen’s Diamond Jubilee Medal for their volunteer work at the Canadian War Museum. They were presented their medal by 2951 General (Rtd) Ramsey Withers at a ceremony held at the War Museum 02 November 2012.

“This system underscores Canada’s commitment to making a meaningful and functional contribution to space situational awareness,”

“It made me proud to watch the 5 Wing team, military, civilians and our contractor partners work together to help these people when they were in a bind,”

“Either way, nominations are pushed up the chain of command within AFAC or the RCAF to eventually find their way to the awards and honours committee at the national level.”

Fit to fight…and then some