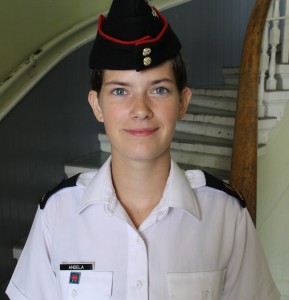 And FYOP continues! During this week the first year Officer Cadets have started their classes which include core curriculum courses in history, English, psychology and math as well as Second Language Training for any non-bilingual students. The events for the week include a continuation of inspections, team building sports such as “Capture the Flag” and the weekend RECSPO where Officer Cadets had an opportunity to learn about the many different clubs and organizations that RMC has to offer. The first years had an opportunity to relax and chat with other members of the school while perusing the many booths of the RECSPO. The first years also had the chance to mingle and sweat with their fellow squadron members as they participated in the Wing wide Sports Day. Officer Cadets had the opportunity to choose between tabloid sports (a series of different challenges), flag football, tug of war and the maze game. It has been a busy week for the Class of 2017 and things are just going to get more exciting and busy!

FYOP and the Harrier Race

This past Saturday, September 7th was the first chance that the Class of 2017 had to attend a Wing Wide spirit event. The first years have a special role in all events, as they are challenged not only to guard their own Squadron artifacts (which can range from flags to hats to mascots) but also to acquire the artifacts of rival squadrons. The first years have this special duty every year and even formed circles around their Squadron colours during the run to protect their Squadron pride. The first years pushed hard to complete the 5k run and celebrated their introduction into College Wide spirit with their Squadrons and flights after the run. The first years then continued to compete in the College Sport Day immediately after and spend even more time with the other members of their respective Squadrons.

Regatta – Enjoyable for more than the I Years!

Hudson, Lasalle and Pontiac Squadrons splashed into action as the air horn commenced the Royal Military College of Canada’s Regatta of 2013. The 8th of September marked another successful day of the annual Regatta races off the docks in Navy Bay. The sun glittered across the water as the RMC cadets, staff and family cheered on the first year recruits as they raced to see who would take the day. Taking place the same weekend as the RMC Sports Day, the Regatta is a fun day where the first year recruits find some solace from their demanding schedules during FYOP, the First Year Orientation Program through which all RMC cadets must pass. The Regatta helps build unity within each of the first year flights and the excess of support from their squadrons gives them motivation and a glimpse of the spirit that makes the college such an excellent place. For the second year in a row Cartier Squadron took the gold but the fun did not end there. With the first years done their FYOP staff got a chance at a no holds barred race in canoes. The first years got to take a break and enjoy watching their staff make fools of themselves as they raced their canoes across the finish line. The roaring crowds at the docks as the first years rounded the buoys and headed for home began to bring much needed life back to the college after a summer devoid of students. The success of the RMC Regatta, and the equally successful Sports Day, gave an indication of yet another extremely exciting and energetic year here at the Royal Military College of Canada.

More on the Regatta from Danielle Andela

The FYOP Regatta is an old tradition where first year Officer Cadets of the Royal Military College face off against each other in a boat race with the support of their FYOP Staff and Squadron members. However the first years are not the only people to get wet during this race as flights aim to toss prominent Cadet Wing members and staff of rival Squadrons into the lake. Banners flew and the atmosphere was electric as the Cadets pushed themselves with all their might and finished strong.

Standings from the race:

The smell of FYOP is in the air!