The annual Haycock Lecture, held this past Wednesday evening in Currie Hall, honours the work of Ron Haycock and Jim Barrett, who started the War Studies Program at RMCC and then helped keep it alive to become the internationally recognized program it is today. This year’s lecture, given by Maj B.J. Brister and paid for by a grant from the RMC Foundation, is symbolic of the idea behind the War Studies Program, that of education, not just for education’s sake, but rather for enhancing the mental capacity of the officer corps of the Canadian Forces. As is tradition, it is always given by a graduate of the War Studies Program (Maj Brister graduated in 1999).

Maj Brister gave a detailed presentation on Canada’s future in the Asia-Pacific region in general and in China in particular. “Economically speaking, that is our future,” he said. “Our traditional markets in Europe and the United States are beginning to dry up, and there are new possibilities to be had in the Asia-Pacific Region.” Maj Brister began his lecture with a look at China specifically. “The Chinese are a very proud people,” he explained, “and while the country will grow old before it grows rich, China will have the largest economy in the world by 2017.” China, he went on to say, is not without its problems. “Their economy is in a period of transition. To continue their growth, they will have to move from manufacturing to innovation, and do so very quickly. They have huge energy needs as well, that they will have to meet.”

Before looking at Canada’s possibilities in regards to China, Maj Brister examined the role the United States plays in the region. “The US is the reining global hegemon,” he explained, “and they are reluctant to acknowledge the rise of China. They also want China to play by Western rules, and that is not going to happen. The Chinese have 5 000 years of recorded history, and they are confident of their future. They see the US as in interloper. They have no desire to match the US militarily; they just want to make it too expensive for the US to pursue that option. That is the Chinese view, anyways. The US, of course, sees it differently.”

Into that situation, then, steps Canada. “We don’t have a great history in the region,” said Maj Brister, who recently returned from a research trip to China. “In 1993, we withdrew from Asia, first because of financial reasons and later because of Afghanistan. Before that, the Chinese remember three things about us. They remember Norman Bethune, Canadian wheat sales to China in 1961, and recognition of Chinese statehood in 1971 under the Trudeau initiative. There are potential connections to be made in China, but there are difficulties to be overcome, as well.” 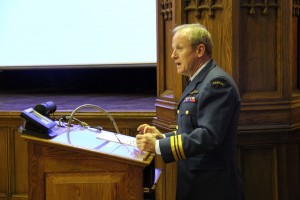 Maj Brister went on to describe what these difficulties are. “The biggest difficult is consistency. Canada left the region before, and now that we are returning, the question on China’s mind is “How long will it be this time?” As another example, the US is no longer the primary customer for Canadian oil; they are now a competitor. Unfortunately, all of our pipelines only flow to there. China will take our oil, but we have to have a way of getting it there, first.” He went on to examine political difficulties as well. “While the Canadian government is ready to do business with China, the public still believes that we should not be trading with China because of its history on human rights. That is an admirable sentiment,” he said, “but we can either not trade with them and suffer the consequences, or do business and try to change the Chinese viewpoint that way.”

For the Cadets in attendance it was an informative and eye opening look at an area of the world where they are likely to find themselves in in the future. In just a few years, they will be on the ships and in the planes and with the units that do confidence building exercises with the Chinese, and which respond to natural disasters in the region. As the quality of questions put to Maj Brister following his presentation showed, the Cadets came away from this year’s Haycock Lecture better for it, and certainly having had their minds stretched.