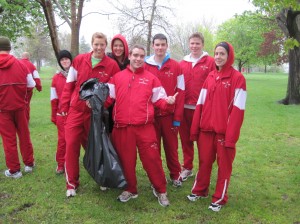 City Parks in Better Shape Thanks to III Years

For three years now, the third year class project has consisted of preparing the city’s public grounds for the summer by performing seasonal maintenance tasks.

The class of 2011 performed these seasonal maintenance tasks May 8th 2010. Unfortunately, due to light rain most of the day, the class had to concentrate their effort in the three following parks: City Park, Lake Ontario Park and Megaffin and Kattings Sports Fields.

OCdts performed different tasks such as painting the interior of some buildings as well as some picnic tables and benches, raked leaves, and help with some general clean up. In addition this year, the class of 2011 fund-raised to buy a new play structure for the city of Kingston.

The third year class project was a great success this year due to efforts from the OCdts. As a class we would also like to thank our sponsors for their contributions, especially Cooke’s Old World Shop Ltd, the Kinsmen Club of Kingston and the City of Kingston.

RMC SWING DONATION: CADETS AT ROYAL MILITARY COLLEGE GOT INTO THE “SWING” OF THINGS TO HELP THE COMMUNITY.  (Short CKWS video)