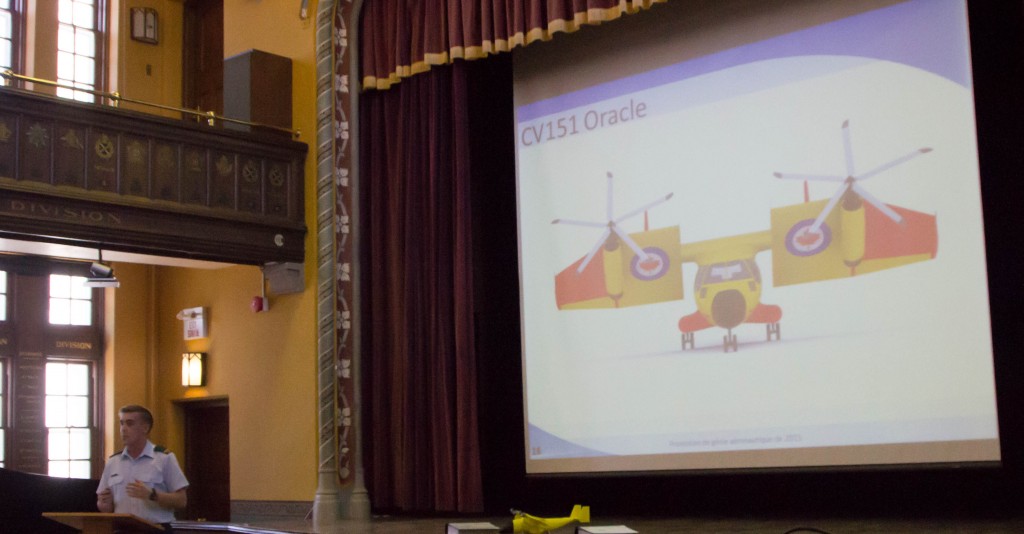 CDS among those in attendance

On 1 April 2015, the Aeronautical Engineering Class of 2015, presented the aircraft that they had laboured over since September to a Currie Hall, filled to capacity with distinguished guests, members and students of the RMC and industry representatives. The goal of the presentation was to defend the design to the many experts in the room and to try and “pitch” the aircraft to potential buyers. The aircraft was meant to be a replacement for the CC138 Twin Otter, operating from Yellowknife in its STOL (short take-off and landing) transport, search and rescue roles. Each year the professors add a nice little catch to make the design that much more difficult. The aircraft had to be capable of vertical and conventional take-offs and landings. The students all had their own design disciplines in which they became subject matter experts. Your scribe for this article had the job as project manager, to try and motivate everyone to keep working despite the countless roadblocks encountered. Attempting to coordinate 15 other cadets who all had different personal schedules in terms of homework, varsity, IMs, and occasionally a social event here and there was a feat in itself. Contrary to popular belief, they all had social lives, but they occurred, invariably, at the expense of sleep.

During the first semester, the class underwent the conceptual design phase where they worked out the exterior design of the aircraft. The conceptual design review in November was meant to point out any possible problems that may have been overlooked. With that extra feedback from experts, the class moved into the preliminary design phase where they refined the exterior design and focused more on integrating all the required systems, as well as designed a more detailed structure and performing a more in depth analysis of performance, stability and control, weights and balance, and environmental impact. The preliminary design review, held conveniently on Air Force Day, was meant to address any unanswered questions from the conceptual phase, to present the latest design iteration, and to determine what the focus would be for the detailed design phase, should that come about.

MORE – Read what the CDS had to say: 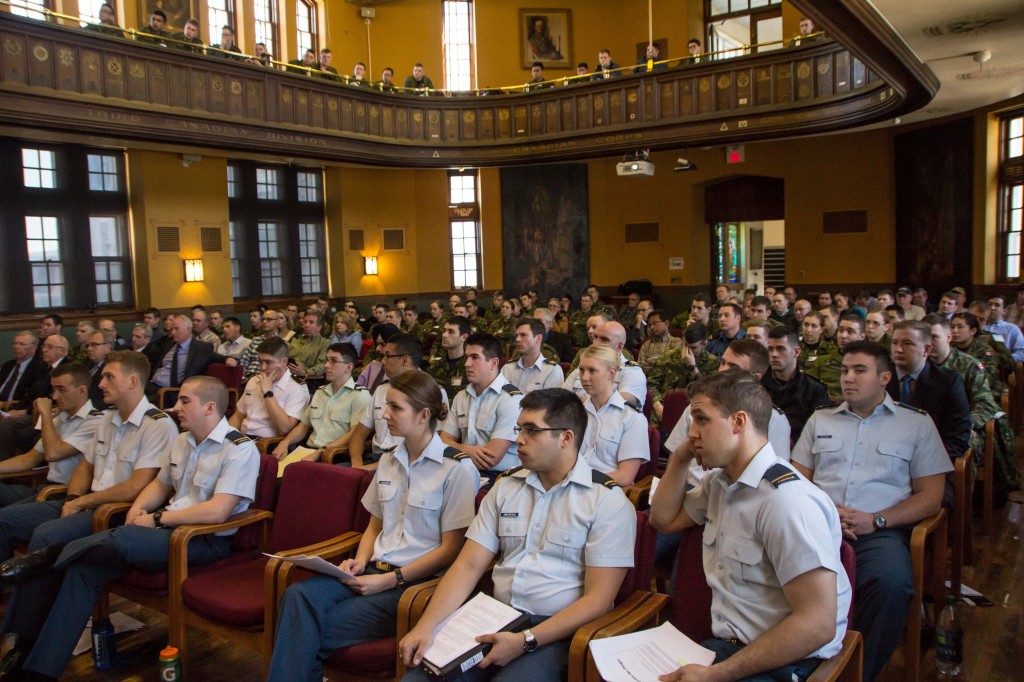 For those who could not attend the preliminary design review, some of the guests included Mr. David Curtis, the President of Viking Air, which is the company that owns the Twin Otter design. We were also honoured with having BGen (Ret’d) Dwayne Lucas, namesake of the Lucas Prize for Aeronautical Design that is awarded to the top 3rd year Aeronautical Design student. In attendance as well were some representatives from Pratt & Whitney, Air Canada, Boeing, ACF Associates, Specific Ranges Solutions, as well as some of the design team members’ parents, fellow students, and many senior operational experts from headquarters, operational squadrons, the Air Warfare Center, and the engineering organizations in the Canadian Armed Forces. Ideally, this is the audience who can most contribute to undergraduate thesis defences. However, the Commandant, BGen Meinzinger and his chief, CPO Davidson, were also able to attend along with the Principal, Dr. Kowal, and a special guest that was kept hidden until a few hours prior to the presentation… The CDS himself, Gen Lawson and his chief, CFCWO West… Incidentally, the General was compelled to show up because the class had sent him a Christmas card with a class photo and an invitation. His private advice prior to the Preliminary Design Review was simply: “No pressure”…

As a class, our fair share of rough patches were encountered throughout the design project. A number of people ask why the class chose to join (arguably) the most difficult program at the college. Having been in the position of Project Manager for the design project and looking back at all the hard work, frequent long nights, and occasional sleepless nights, It is fair to say that I speak on behalf of the class when I write that we chose this path not because it was easy (obviously), but because it was challenging. This project alone has allowed us to see exactly how far one can go before we break; and if that happened, it was incredible to see how supportive we were for each other when a member of the design team was at the end of their rope. Now if you asked any of us if we would do it again, I’m willing to bet everyone would say “no”. But ask us if it was worth it, and we would all say it was well worth the effort. After all, how many times to officer/naval cadets get to present their work to the Chief of Defence Staff?

Ed note: We touched base with General Lawson to get his views on the presentation:

“I was in attendance partly because I have such enormous respect for RMC Engineering programs, but also because I received a late Christmas card in January that included an invitation to the presentation in April. How could I turn that down?

I found Dr Allan’s pump-up introduction outstanding, the quality of the project briefing itself to be excellent, and the preparation the class had done for the question period was superb. Once again I am heartened by the level of education at RMC and the confidence and capability of the cadets attending.”