It is that time of year again, and with the onset of spring it seems that along with the rest of the world, the college is coming back to life. There are many new projects getting underway all over the grounds but this year, amongst the clouds of may flies there hangs a cloud of dust, over the fresh, green grass there is the odd splash of colour, and drowning out the chirping birds it the whine of angle grinders and sanders.

This spring, along with the rest of the college, the various monuments on the grounds are getting a facelift. Under the leadership of Pat Carr and the close supervision of the College Museum, a team of several officer cadets and corporals have undertaken this monumental tasking. The pieces to be restored include both German 88mm Guns (PAK 43 & Flak 37), both captured during the Second World War, The Brownfield 25 pounder field Howitzer, placed here as a memorial to #1022 Major-General Brownfield, The 4” Twin MTG HA XIX Naval Gun taken off of the HMCS Huron, The Centurion Tank Mark 5, presented to the Royal Military College by the Class of 1979, and the Torpedo Mk IX, presented by the Royal Navy for the Royal Military College Centenary in 1976.

As most of these monuments have been around for the last half century, they have managed to collect more than their fair share of rust over the years. The Upcoming graduation ceremony aside, they were already in desperate need of attention. They are being cleaned and sanded, repaired as necessary and repainted several times over. Two of the monuments; the twin naval guns and the Centurion Tank, are to be professionally restored by a company contracted by the college for this very task. The rest of the work will be undertaken by the team put together here at the college.

All of the monuments will be fully restored and returned to the initial fervour of their glory days in time for the graduation ceremonies. After brushing off some of the other dust that had settled over the winter on the grounds and after several parade practices and inspections of the wing, I expect that the whole college will be ready to represent itself with the same sort of zeal. 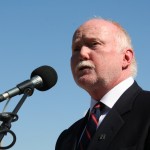 The Foundation plays a critical role in providing the means to enable the Cadets to benefit from the “Margin of Excellence” while at RMC. Through the generosity of the various donors, the Foundation is able to support activities across all four components of the College program.

The meetings enabled the College and the Foundation to move forward on a broad range of issues thereby ensuring that together, the College and Foundation are well positioned to continue providing “Margin of Excellence” support to the Cadets in the future. 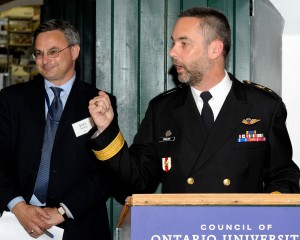 On Thursday and Friday (22, 23 April) the College was honoured to host members of the Council of Ontario Universities for their end of year meeting. Comprised of Presidents and senior leaders from Colleges and Universities across Ontario, this distinguished group conducted a series of discussions in Currie Hall. For more than 40 years, COU has been working to improve the quality and accessibility of higher education in Ontario.

The Commandant (photo right), Commodore Bill Truelove had the great privilege of addressing the group during their dinner at Fort Henry on Thursday evening. This two day event provided the Principal (photo left), Dr. Joel Sokolskyand his team a tremendous opportunity to expose and educate the Ontario University leadership community to RMC and to provide them a more detailed understanding of the College and the excellent programs we have. 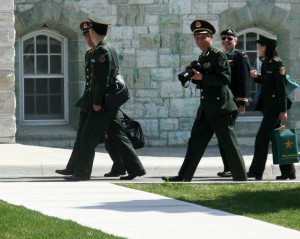 Commander,  Canadian Defence Academy – Major-General Daniel Gosselin recently hosted a luncheon at the Senior Staff Mess and a short tour for a visiting Chinese delegation who were passing through Kingston.