As part of their athletic component Cadets are required to pass two out of three RMC Physical Performance Tests (RMC PPT) a year.  Undoubtedly, it is easy to grow complacent during the Christmas break and let physical training fall by the wayside: eating mom’s turkey and stuffing, lounging on a beach down south with a Piña Colada, or even just watching too much TV, all contribute to an enlarged waistline.  The military life requires constant dedication, and while Cadets may be on break for over three weeks, this should not be an excuse to stop exercising.  As such, the RMC PPT is administered shortly after the beginning of the New Year.  Those who worked out during the break are rewarded with high scores.  Those who didn’t huff and puff and may find themselves having to work out extra hard on the Supplementary Physical Training Program. For the last week or so, Cadets at RMC have been busy running through the Winter PPT.  So far, things are looking good! In general, results have been positive: some have had difficulty meeting the standard but the vast majority of Cadets performed well and passed the Test. Cadets who failed will be given the chance to redeem themselves, shed those “Christmas Calories”, and try again at the retest in a couple of weeks.

Strength and endurance could mean the difference between success and failure in a military operation. For this reason, Canadian Forces (CF) personnel must be more physically fit than the general Canadian population.

This is an irrefutable truth of life in the Canadian Forces.  Even more so amongst the officer corps: as a leader, the officer not only has to deal with the physicality of any given situation, but must also be able to think ahead and plan in real time often under great stress and duress.  As such, simply being “fit enough” to pass the Canadian Forces Express Test just doesn’t cut the mustard. 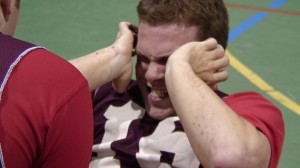 The Royal Military Colleges have recognized the need to train officers who not only think on their feet, but do so even when subjected to intense physical exertion: it is difficult to think when you have to focus on your breathing.  Through an intense physical education program the Colleges give cadets the tools needed to develop and further their physical fitness.  As part of this process Officer Cadets are evaluated three times a year through the RMC Physical Performance Test.  This allows Cadets to objectively monitor their level of physical fitness and keep track of their progress throughout the year.  In addition, the Test allows staff to monitor Cadet performance and help those Cadets having some difficulties while recognizing the efforts of those who excel.

Cadets who have trouble passing the Test are placed on Supplementary Physical Training: under the guidance of a special Coordinator, they go through a structured physical training regimen designed to improve their physical fitness, improve their self-confidence, and give them further knowledge related to physical fitness such as exercise techniques and proper nutrition.  On the other hand, Cadets who show elite performance are recognized through an incentive program and are given special recognition: they can wear the Crossed Bats and Crown Award and the top Cadets receive a special t-shirt to be worn while exercising.

The Test is administered three times a year, and Cadets must pass the test at least twice in order to achieve the athletic pillar for that year.  Re-tests are administered and some exemptions may be given for medical reasons, but Cadets who show little improvement and fail to meet the minimum requirement are deemed to have failed the athletic component at RMC.

The test includes five components: 20 meter shuttle run (20MSR), push-ups, agility run, sit-ups, and standing long jump.  Each component is monitored according to stringent guidelines and Cadets are assigned a score commensurate with their performance.  Each item is scored on 100 points, for a maximum total of 500 for the entire Test.  Cadets must achieve a minimum score of 250 to pass.  However, each component has a minimum score: failure of any component results in a failure for the entire test even if the total score exceeds 250. 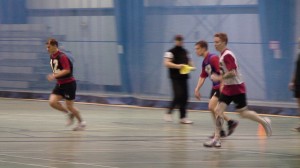 Cadets must run from one line to another (20m) following a sound cadence. At each sound signal, they must touch the line, pivot and start proceeding to the other side. The cadence accelerates each minute, and each minute represents a “level”. The minimum level which must be reached is 9.5 for men (84 laps) and 7.5 for women (64 laps). 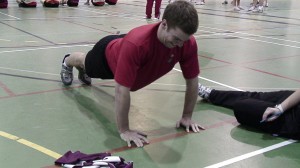 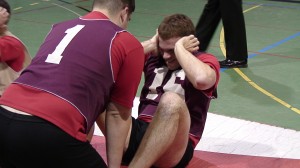 Assisted by a partner who holds their feet on the ground, Cadets must complete full sit-ups according to established protocol.  They are given 2 minutes to complete a maximum number of sit-ups.  Incomplete or unsatisfactory sit-ups are not counted.  The minimum number required for both men and women is 35. 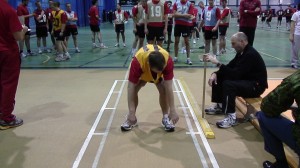 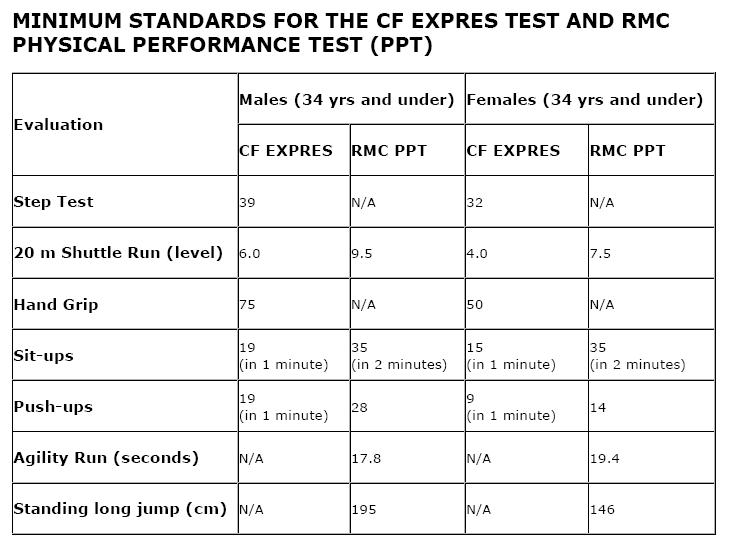