RMCC: The Week That Was & More…

As a part of the USMA and RMCC Exchange, the RMC Club sponsored Alumni game was a great success on Saturday afternoon and included 4 x former NHLers (Rick Smith, Fred Barrett, Brad Marsh and Jean Payette) and 20 Ex cadets. The two game referees were also Ex cadets. It should also be noted that the commandant, 16888 Al Meinzinger, principal, 14458 Harry Kowal; and Director of Cadets, 19706 Patrick Lemyre – all three curren leaders from the college participated in the game.

Special thanks to 15992 Andre Labrie for stepping-up and helping to coordinate the lineups and ensuring things ran smoothly on game day.

13666 Steve Noonan (RMC ’82) had this to say following the game. “…I did want to point out that John Adams has become a cleaner player over the years.” Ed Note: 6508 John Adams (RMC ’65) is well known in CAF hockey circles going back to his days with 3 Field Squadron, CFB Chilliwack, very first CAF national hockey champions in 1968. 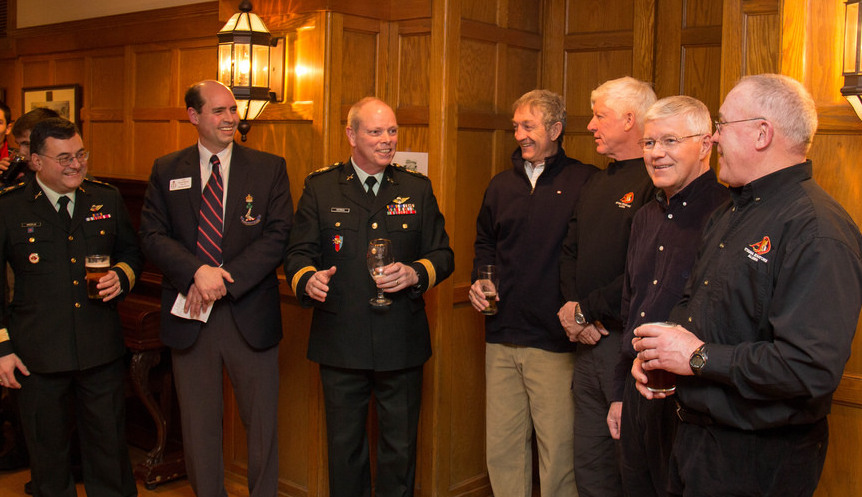 The Club also hosted “Pre-Game Warm-up” reception at the Fort Frontenac Officers’ Mess was very well attended by 170 people which was outstanding given the weather. Click here for more Curtis Maynard photos from this event.

Other items of interest:

The Principal, Dr Harry Kowal attended a meeting of the L’Association des universités de la francophonie canadienne (AUFC) in Ottawa on 24 Jan; commandant, BGen Al Meinzinger had the opportunity this past week to visit CMR Saint Jean to discuss common areas of interest and help foster synergies in the areas like information management and liaison outreach efforts.

The Cowan Prize for Excellence in Research Public Lecture

The 2013 Cowan Prize for Excellence in Research Public Lecture was held on Wednesday, 22 January 2014, in Currie Hall. Dr. Keith Neilson, this year’s recipient of the Prize, received a check for $5000 from the Principal, Dr. Harry Kowal, on behalf H24263 Dr. John Cowan, former College Principal and the man who endowed the Prize, and Dr. Lawrence McDonough, the Dean of Arts. The Cowan Prize for Excellence in Research was established by Dr. John Cowan in 2000, and is presented every year to honour RMCC’s top research professor. Winners of the award are chosen by a panel of their peers as well as by external scholars in their field according to the quality, originality, impact, and of the scholarly of their work. Aside from a cash prize, the winner has the chance to provide a public lecture on their research.

In his presentation to an audience of faculty, staff, Cadets, members of the RMC Club and the public entitled, “History and the Art of Decision Making,” Dr. Neilson examined the challenge of presenting historical events at a time where the overly simplistic “lessons of history” proposed by pundits and what he coined as “know-nothings” in the popular media crumble in the face of academic rigour. Making use of the “July Crisis,” the diplomatic dilemma that confronted European leaders during the summer of 1914, and that ended with the outbreak of the First World War, to illustrate his point, Dr. Neilson explained that in contrast to popular view held on the causes of the conflict, the diverse domestic and diplomatic situations of each of the major powers, demonstrates that the result, the outbreak of a general European war, was never certain.

Dr. Neilson is a former head of the Department of History at RMCC, who received his degree from Cambridge University. Professor Neilson is an expert in 19th and 20th century British foreign policy, Anglo-Russian relations, the British Army, and the First World War. His published articles touch topics like Lord Kitchener, British propaganda and intelligence in First World War Russia, and British military reactions to the Russo-Japanese war.

A lively question period followed the presentation, after which a reception was held to honour Dr. Neilson, who, after over thirty years of teaching at RMC, happily accepts the title of Professor Emeritus as he commences retirement.

The success of this evening was due to the efforts of many organizations and individuals, including the RMC Foundation, which supports so many activities at the College; the College J3 Staff, the RMC Graphic Arts Section, LCol Larry Paziuk, and finally, the RMCC faculty, whose researches in the arts, social sciences, science and engineering have brought the highest honours to RMC, and have maintained the rich reputation this College enjoys. 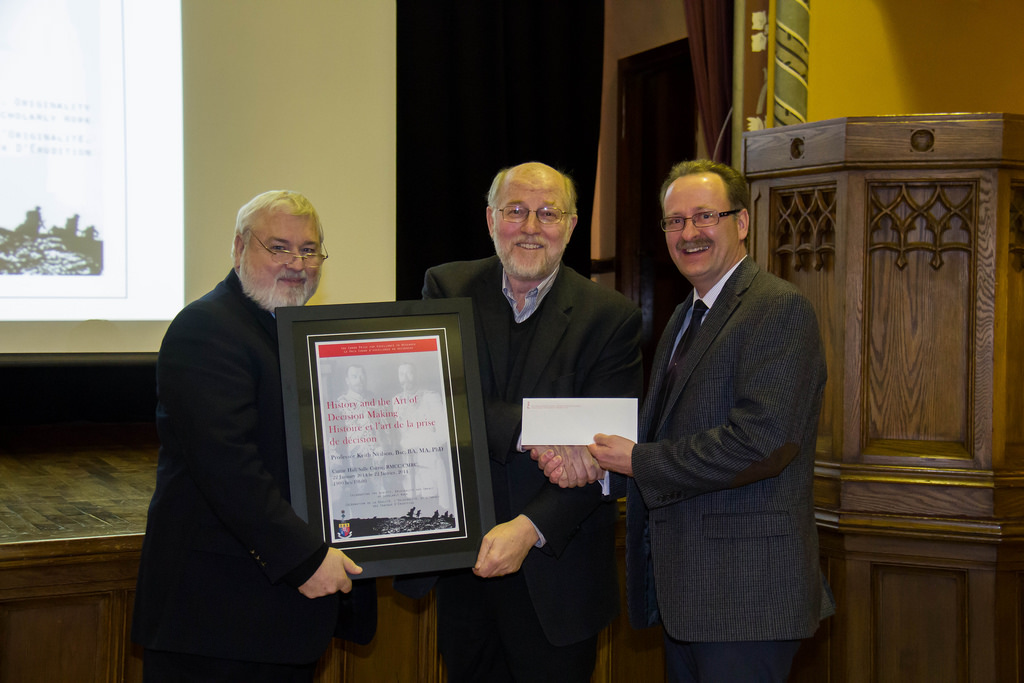 MORE PHOTOS BY CURTIS MAYNARD FROM THIS EVENT HERE