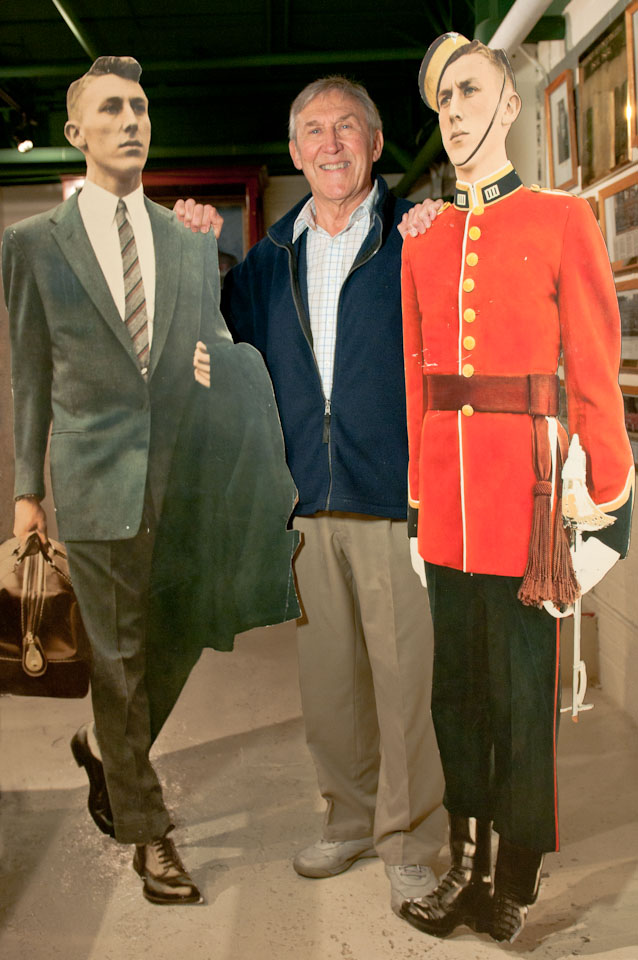 While  5554 Les East travelled the world, a piece of him was always close to home.

Or more specifically, three life-sized cardboard cut outs always were. A graduate of Royal Roads Military College*, East posed for a series of photos in school uniform during his second year in 1959. It wasn’t until he attended the PNE in Vancouver later that year that he saw himself, life-sized and on cardboard, as promotional material for a recruiting booth.

His mother saw them too and requested they be sent to her home in Vernon when the college was done with them. The cutouts ended up in the family home for years, East says.

“Anyone who would look in the window would see this nasty looking fellow in a scarlet tunic,” he recalls with a laugh.

East himself didn’t stay still anywhere for long. After time in Alberta, he was stationed at Patricia Bay on Vancouver Island for the summer of 1963. It was there that he met his future wife, Betty, before moving east to further his training. The opportunity to fly a Sea King helicopter caught his interest, but Betty had captured his heart.

“I was hooked. There were a lot of letters back and forth,” he says.

The Sea Kings never materialized, however, as the Vietnam War caused a delay in the aircraft arriving in Canada. With no helicopters to fly, East was redirected to the United States to work for the U.S. Coast Guard, an experience that proved to be very rewarding.

“In the military you are trained for combat, in the navy a little less so,” East said. “With the Coast Guard, their whole mission in life was saving people.” A memorable instance of this for East was flying a helicopter used to drop food down to a Boy Scout troop marooned on a mountainside.

In 1964 East married Betty and they eventually returned to Canada, this time to the East Coast. By that time the Sea King helicopters had arrived. East was stationed on three different destroyers over three years, and eventually saw himself in Germany.

“I was one of the first to fly Sea Kings off destroyers,” he notes.

As for the cardboard cut outs, as his parents aged and moved to a new home, the cutouts went east too. East had them moved to his home in Ottawa, where they were joined one Christmas with matching cutouts of his two sons – a surprise Christmas gift to him.

East’s career took him to postings as the head of flight safety for the Canadian Forces and eventually, outside of the navy, as manager of flight tests for what is now Eurocopter in Fort Erie, Ont. He retired in 1995, bought a motor home with Betty and spent 14 months travelling North America.

Not one to sit still, East is active on the track through Masters Athletics in events such as high jump, long jump and discus throwing. He competes in track meets throughout the U.S.A. and B.C., and has won nearly 100 medals in seven years. The honours come from events such as BC Seniors Games and the Canadian Masters.

Home base is now Victoria. The cardboard versions of himself beat him there, as East gifted the well-travelled pieces back to Royal Roads University nearly a decade ago. They have recently been put back on display at the Hatley Park Museum.

*From 1940 until 1995 the grounds of Royal Roads served as a military officer’s training institution. Originally opened to train naval reserve officers for service in World War II, it was soon expanded to provide a military and academic education for all three military services. Learn more here.