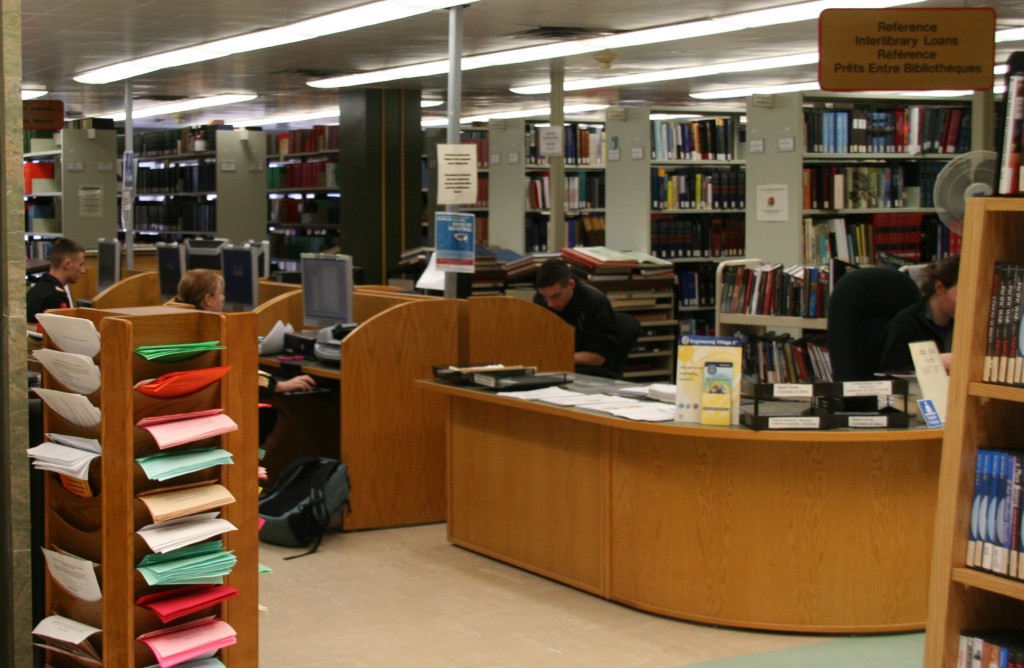 College Quiets Down as Cadets Get Ready for Final Push

The halls of RMC were quiet this past week as the Wing entered the pre-Exam routine. Military activities are limited during the two weeks leading up to exams to allow the Cadets to focus on the studies and finish up any remaining final papers. Many of the Fourth Year Grads-to-be have already received their posting messages, while Cadets of the other years have summer training and OJT’s to look forward to. Thoughts of life after RMC, or a summer spent in sunny Esquimalt or Gagetown will have to wait, however, for one final sprint to the finish before the focus shifts to Environmental Preparatory Training and Grad Week in May. RMC relaxed this past week under the bright Spring sunshine. Uniform jackets came off and Cadets spent more time outside as the College exploded in a sea of green. The good weather also means time for Spring cleaning, and crews were out in full force to remove the remaining signs of Winter maintenance on the roads and campus grounds. As all this suggests, Graduation is just a few short weeks away. The Cadet Wing cannot fully enjoy the weather just yet, though. Exams are right around the corner.

25366 NCdt (IV) Mike Shewfelt got out this past week to see some of the sights of Spring around the College. 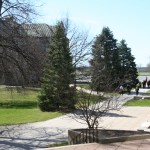 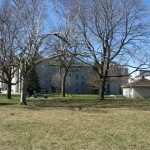 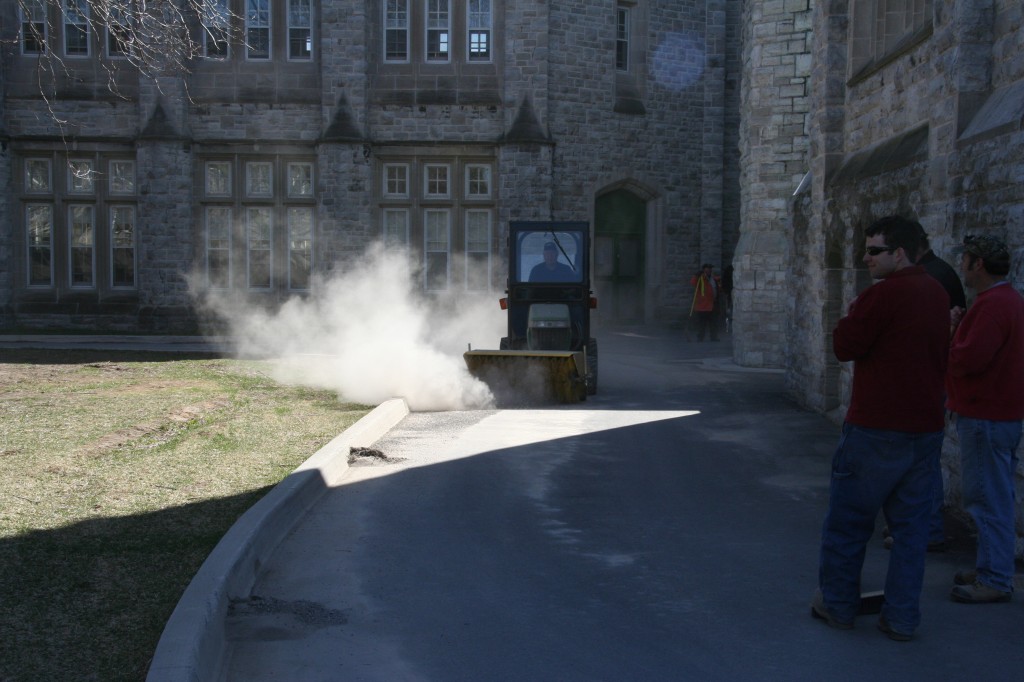 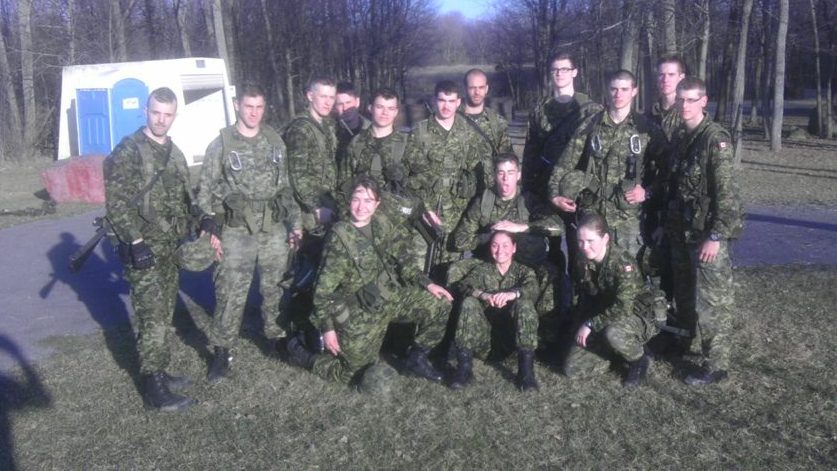 After several grueling months of training, the RMC Sandhurst team is entering its final phase of training before the West Point competition. The cadets have mastered all of the tasks and skills that are integrated into this year’s competition, including foreign weapons assembly and handling, marksmanship, grenades, radio communications, boat handling, IED detection and response, TCCC, rappelling, rope bridge water crossings, knots, navigation, and section level tactics. Moreover, they have achieved a peak level of physical fitness through their demanding PT program. Every Sandhurst member has pushed themselves beyond their predefined limits in order to reach an optimal state of mental and physical stamina this year. 25727 OCdt (III) Brandon Philp, the team captain, says “we’ve trained harder than I can remember in previous years”. Above all, they have grown to become a highly cohesive unit which will allow Team Canada to surpass all other adversaries in this year’s competition. Their hard work and dedication will set them up for success in the upcoming competition.

The cadets will depart for USMA on April 13th 2012. During the week leading up to the competition, they will familiarize themselves with the obstacles and the terrain at West Point. This year’s Sandhurst competition offers a new layout for the participating teams. According to OCdt Philp, “the structure of the competition this year is very difficult and demanding but there is nothing we can’t handle”. The first day, they will tackle land navigation and the range event. The next day, the team will undertake the obstacle course itself. Friends and fans of the team members are loading onto the Fan Bus to support them in their endeavour and this overwhelming show of support from the Wing has gone a long way to motivate the members of this year’s Sandhurst team. The RMC Expedition Club is off to a fresh start in 2012 under the leadership of the new Club President 25982 OCdt (II) Colin Strong from Kentville, Nova Scotia. This past month OCdt. Strong and the outgoing Club President 25881 OCdt (III) Anthony Matlock presented the Expedition Club “White Paper” to the Commandant, detailing their vision for the future of expedition training within the Royal Military College of Canada. According to this document:

“The [Expedition] Club’s two-fold and long-term vision is to:

1. Push the Margins of Excellence – individually and as teams – through mission-like expeditions that seamlessly synthesise RMCC’s Four Components in an international setting.

Participants will not only embrace Truth, Duty and Valour, they will naturally seek challenges beyond the campus in real world situations….”

Along with the creation of a long-term vision, the Club Executive was refreshed with the election of several key new members including Vice President (Exernal Affairs) 26170 OCdt (II) Carter Powis, Vice President (Operations) 26550 OCdt (I) Shane Coote and Vice President (Academics) 26268 OCdt (I) Stephanie Paquette. Together they have planned, and begun the execution of, the first of a series of Expeditions: the 2012 Amazon Expedition.

Slated for mid-August, a team of cadets will be heading to Ecuador to complete a punishing cross-jungle trek culminating with forging the Amazon River and summiting the tallest Volcano in Ecuador – the 19,347 foot Cotopaxi. Moreover, these cadets will be working with local tribes in humanitarian construction projects, as well as conducting first-hand academic research in the fields of politics and history.

The Expedition Club was very fortunate to be introduced to 16990 Lt. Col (Ret.) Steve Nash. As a former officer in the Royal Canadian Regiment, he has a wealth of experience training and commanding Canadian soldiers on training and operational missions across Canada; the United States and around the world. He kindly took the role of Club Advisor, designing the screening process for prospective members of the 2012 Amazon Expedition. On Wednesday, April 4th Mr. Nash ran this screening process with assistance from the PSP staff of KMCSC. Mr. Nash’s evaluation of each cadet will determine the final 2012 Amazon Expedition Team, which will be announced next week.

Once the torch has been passed to the Expedition Team, the Club Executive will begin work on its next two projects: regional expeditions to Ontario’s Provincial Parks, and the 2012-2013 Canadian Arctic Expedition. Interested persons are encouraged to check out the Club’s website: http://rmcexpeditionclub.com/.