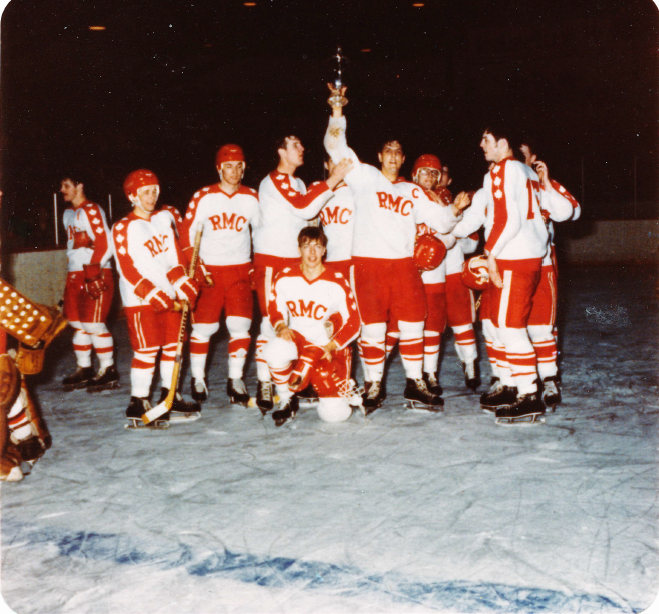 A lot of things were different back in the 70s when we were going to RMC, but even in the four years that we were there, things had already started to change.  On one weekend “away” trip to play hockey against McMaster University and Ryerson, we found out that McMaster was not only going to televise the game for the very first time, but they were even going to have student announcers to do the play-by-play.  More importantly, since we had no way of recording the game, we were also very glad to hear that they planned to delay the broadcast until Sunday morning.

Fortunately, the next day, we found the Hamilton channel on the TV in our hotel in Toronto, so we all gathered in one of the rooms to watch the game before we headed out to play against Ryerson.  None of the guys had ever seen themselves on TV before so everyone was quite excited about the prospect.  Not sure about the other guys, but for me the biggest surprise, having watching Hockey Night in Canada regularly on Saturday evenings, was how slow the pace of the game seemed to be in comparison, especially for me since I was never a particularly fast skater!  I used to joke later on as I got older that I had lost a step I had never had to lose in the first place, but this was quite an eye opener, and gave me a really good idea of how fast the NHL players actually were.  Nevertheless, we watched intently and of course beamed with pride every time our names were mentioned on a particular play.

Interestingly, we had come from all parts of Canada, so nobody really thought too much about our different backgrounds, until we listened to the student announcers during one particular sequence –  “Stecyk slowly carries the puck out of the RMC end, as the ref has his hand up for a delayed penalty against McMaster.  Stecyk skates over the red line and dumps the puck in to the McMaster corner just as Wishloff jumps on as the extra attacker.  Trynchuk rushes in and gets there first.  He quickly flips the puck to Zelenka behind the net.  Zelenka stickhandles over to the sideboards, and backhands the puck to the point, to Istchenko.  Istchenko takes the puck, avoids a poke check and passes back to Brown on the other point ……..”  At that very moment there is a pause, and then you can hear the colour commentator chuckle and exclaim “Brown?! Brown?! … How’d he get in there!”