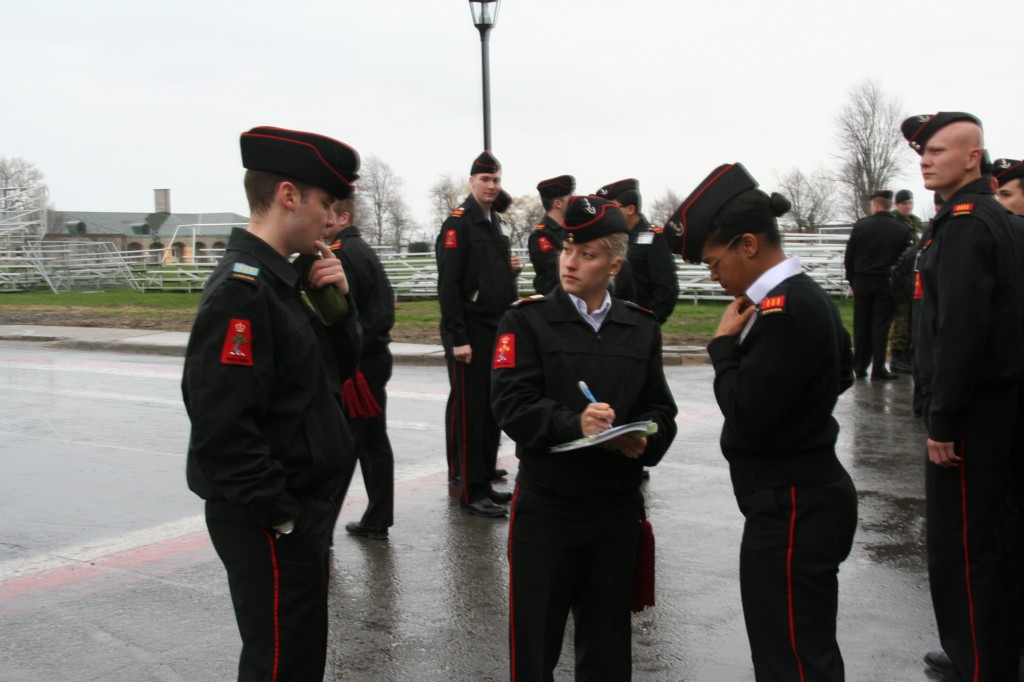 While military activities have been limited during the last two weeks to allow cadets to focus on upcoming exams, some have continued. Above, 25064 OCdt (IV) Marie-Pier Blanchard-Messier, A Div CDL, does roll call for A-Div on a rainy Tuesday morning. She is taking attendance from 25786 OCdt (III) Brennan Roche, left, incoming CSL of 4 Sqn, and 25715 OCdt (III) Sabra Gardner, right, incoming CDL of A Div. The incoming barslate for the Fall 2012 Semester recently began to shadow the current barslate in order to learn the ropes before officially taking the helm in September. 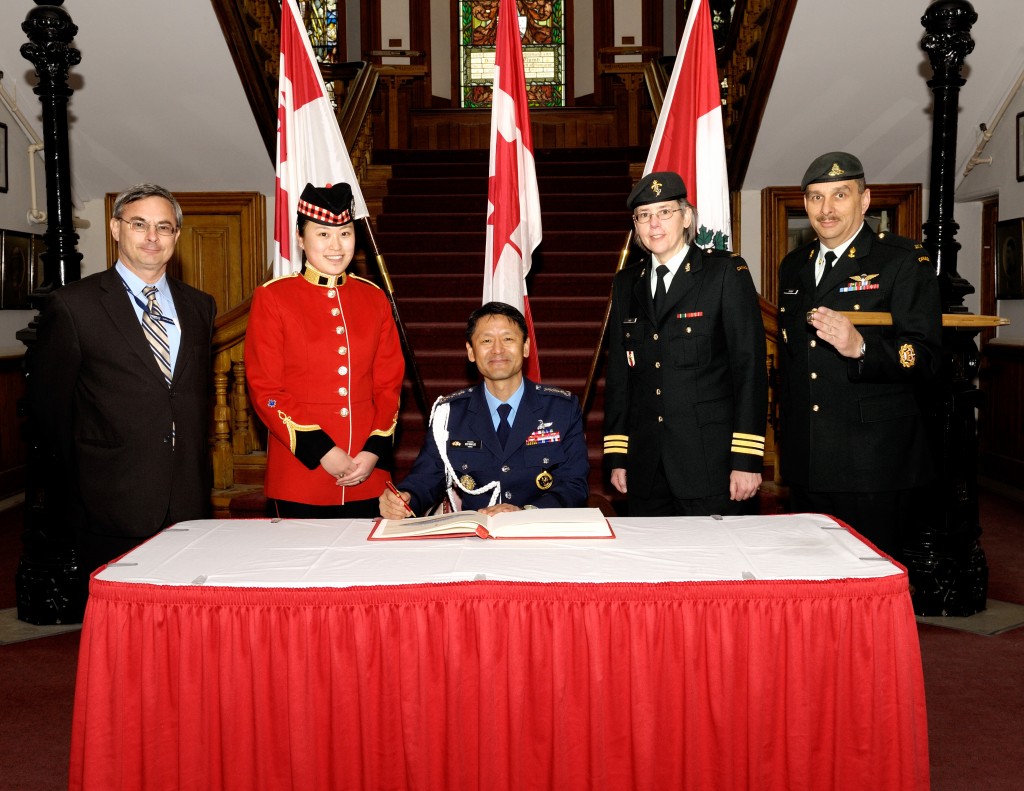 On Wednesday, the RMC Multicultural Committee hosted the College’s first Multicultural Day, promoting the culture and traditions of the Republic of Korea (ROK).

The highlight of the day’s events was a briefing given by Colonel Soo Wan Lee of the South Korean Embassy. Col. Lee is a celebrated member of the Korean Air Force who has received staff training and service awards in Mexico and the United States prior to taking his current role in Ottawa in 2010.

Col. Lee first explained the history of the ROK Armed Forces, which has included significant involvement in the Korean War, Vietnam, the Gulf War and multiple Peacekeeping Operations since 1993. The Colonel made a point of emphasizing that the people of South Korea will never forget the sacrifice of over 500 Canadian soldiers in support against the North Korean aggressors in the Korean War, and that the link between Canada and South Korea will forever be strong as a result.

The Colonel then discussed the organization and rank structure of the ROK Armed Forces, which is remarkably similar to that of the CF. In fact, every officer rank is identical to those of the Canadian Air Force and Army. Also comparable to the CF is the top of the ROK’s military food chain, which includes a Minister of National Defence and three elemental Chiefs of Staff.

The Colonel discussed the capability of the South Korean military, being the 6th largest military in the world with a total force of 650,000, approximately 20% of which are made up by South Koreans filling their 20-24 months of obligatory service. The Colonel focused on the high-tech capabilities of each element, most notably that of ROK’s fighter aircraft. For example, the ROK’s advanced fighter trainer, the T-50, is being widely exported due to its training value for pilots who will soon fly the F-35.

The Colonel wrapped up his presentation by briefly discussing Korean culture, emphasizing the delicious foods that South Korea is known for. Many Korean plates were offered to cadets at lunch on Wednesday at the Cadet Dining Hall, as well as after Col. Lee’s presentation.

After a brief question period where the Colonel answered inquiries mostly focused on South Korea’s obligatory service, those attending the brief (including multiple cadets and Training Wing staff) moved into the Snake Pit to learn more about Korean culture. Cadets had prepared multiple presentations on Korean food, entertainment and sport.

Overall, RMC’s first Multicultural Day was a great success. The Multicultural Committee looks forward to organizing 1-2 similar events per semester in the coming years to further expose cadets to cultures present in the CF we may otherwise know little about. 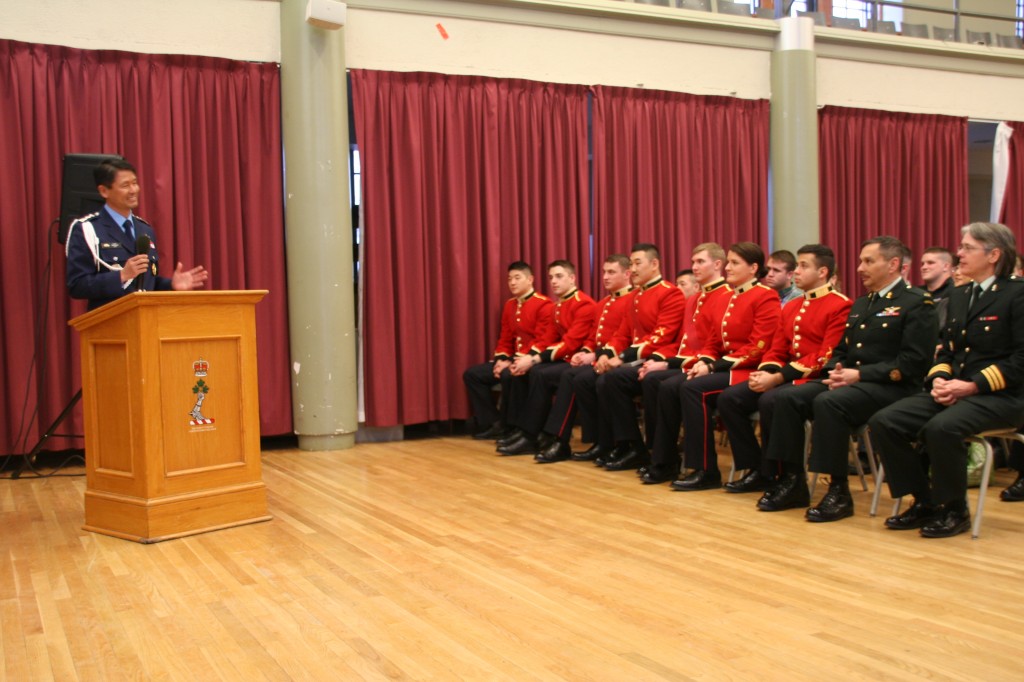 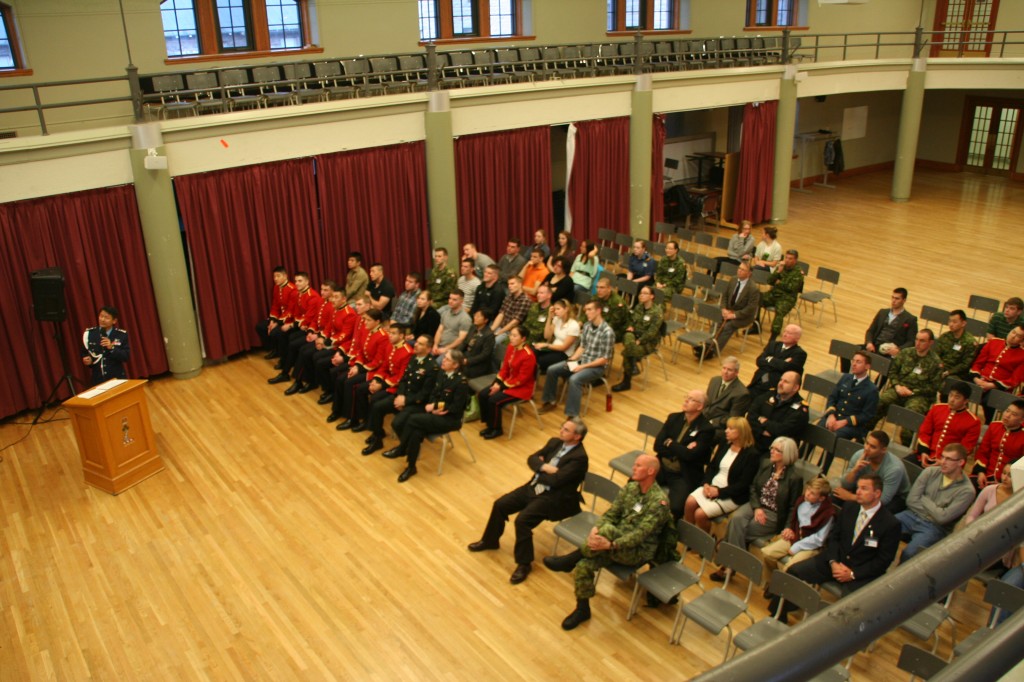 Sandhurst Team On Their Way

The 2012 RMC Sandhurst Team left Kingston last Friday morning for the US Military Academy at West Point. They will spend the week there familiarizing themselves with the terrain and the obstacles on which they will be competing before tackling the land navigation and range events on Friday, 20 April, and the obstacle course the next day. A fan bus will leave RMC late on the 20th to provide support for the team. Watch the next issue of e-Veritas for details on the competition. 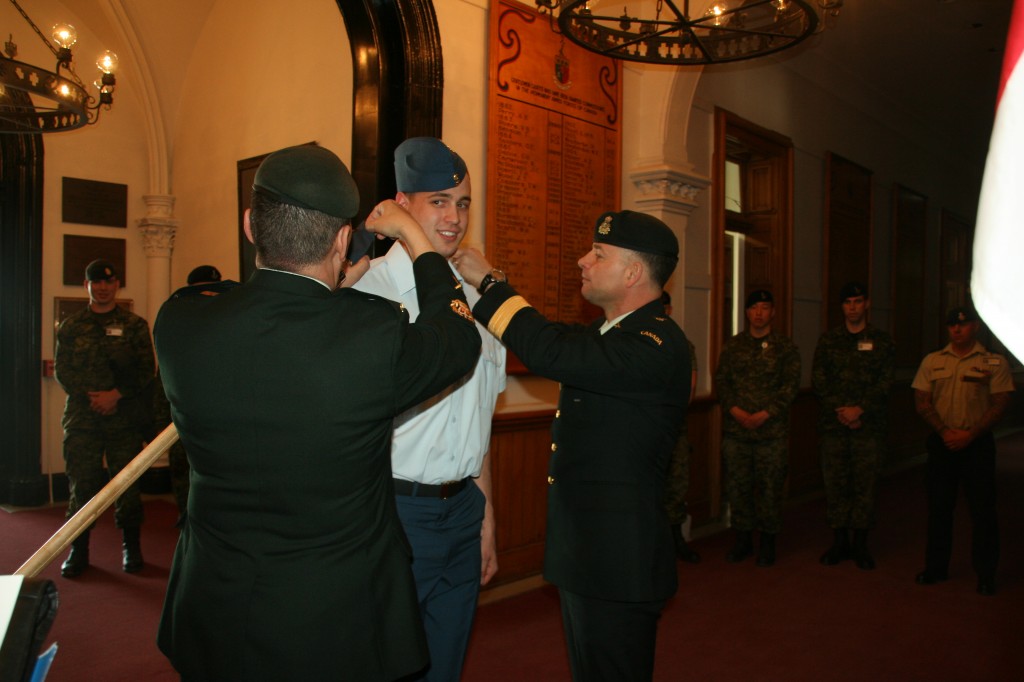 This past Friday, April 13, 25768 OCdt Andrew Holmes relinquished his status as an Officer Cadet to become Private Holmes, RCAF. He is picture above, receiving his new epaulets from the Commandant of RMC, BGen Eric Tremblay, right, and the Training Wing Sergeant Major, MWO Andy Skinner, left.