This week, on the 25 November 2015, the Officer Cadets of the Royal Military College of Canada underwent the weekly Professional Military Training (PMT).

It is important for the Officer Cadets to master these drill maneuvers, as they will be performing these maneuvers during their time at RMC on parade and drill competitions. The cadets worked hard in the short period of time to learn the maneuvers. The first years are now more confident with their abilities to do rifle drill throughout their career for their future as a Canadian Forces member. 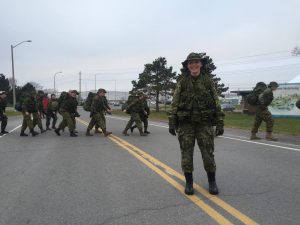 This week, the second year officer cadets were given a chance to re-live their summer training by taking part in a ruck march. The march was led by Captain Graydon, and Warrant Officer Ansell acted as the 2IC.

The purpose of the march was to give the cadets an opportunity to be refreshed on the principles of ruck marching as well as to get their bodies back into shape, since many of them had not touched their packs since the summer.

Some points stressed during the session included the importance of properly packing a ruck, due to some falling apart during the march, and how to prepare for operations in colder weather. Before things got started, the cadets gathered on the parade square for a kit inspection.

Afterwards, they engaged in a brief warm-up and stepped off. There were smiles all around and a generally high level of morale as they marched around the college campus and up to Fort Henry and back. Besides a few valises coming apart, the session proceeded without incident and everyone involved learned some valuable lessons that they will be able to use for the rest of their careers.

This week for PMT, the third year class had an interactive lecture with Major Bradley, OC A DIV, and WO Stewart, A Div WO. The focus of their presentation was the importance of the officer and NCO team. Major Bradley provide examples and expertise on the officer side and Warrant Stewart offered insight as an NCO.

The lecture lasted for about an hour before we were split into our divisions and were given various scenarios which related to what our presenters had just talked about. The examples provided were real-life situations that we may have to face at our units. By learning how to deal with these challenging situations, it will allow us to be more professional and competent when interacting with our senior NCOs when we arrive at our unit. 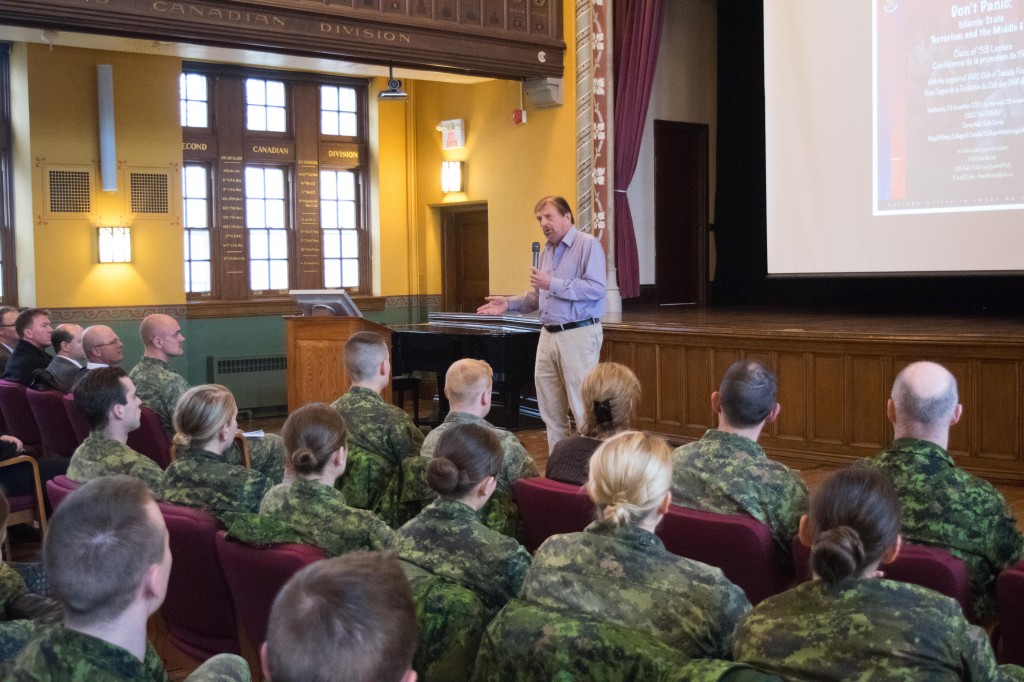 For PMT on November 25, 2015 the 4th year class at the RMC attended a seminar presented by Gwynne Dyer. Mr. Dyer presented to a full Currie Hall, his presentation on the Islamic State and Terrorism.

The slogan of this presentation was ‘Don’t Panic’.

The presentation covered a variety of topics regarding the rise of the Islamic State (IS), and its associated terrorist actions. Mr. Dyer began by giving a detailed history of Islam extremism in the Arab world up too today.

This history included many facts and details previously not known too many 4th years.

The second half revolved around contemporary actions of the IS, specifically those that effect Canada. This presentation was relevant to the 4th year OCdts because it revolved around the security concerns regarding the IS, and terrorism in a general sense. It also helped its audience understand better what entails terrorism, and how Canada should react to future terrorist activity performed against it.

The 4th year class was able to benefit greatly from this seminar, by learning about a major issue that is, and will continue to, influence Canadian security policy. It is these policies which will decide how we act as members of the CAF in the future.

It should be noted that this lecture was made possible through the generous support of the Class of 1958 coordinated through the RMC Foundation. 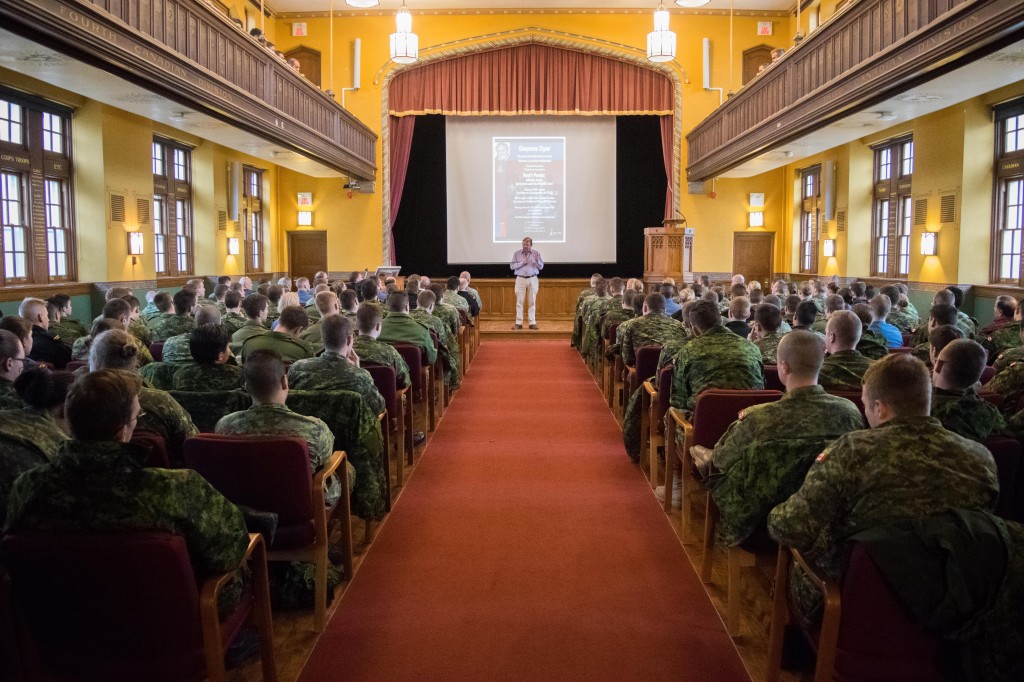 Exams just around the corner

The last day of classes at RMCC is Friday 4 Dec. Exams start on Monday the 7th and wrap-up on the 18th!

Almost cadets are anxious during this time period.

Leading up to the big days and to help loosen up the nerves that many if not most experience – an extra fun event was organized last week on the second floor of Yeo Hall. 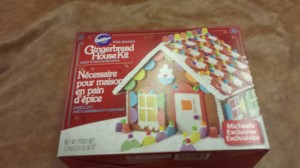 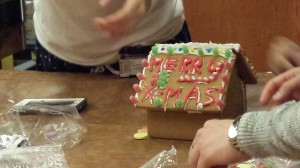 Twas the second last Thursday before exams, and all throughout RMC,

Pens and keyboards keys clicking, brains whirling as fast as can be.

But wait! What is that? Some laughter I hear

Holiday construction I see, aided with plenty of beer!

About thirty or so Cadets, packed all snug in the Mess,

With candy and icing, made gingerbread houses, more or less.

As quickly as they were made, these tasty holiday treats,

Were gobbled up by all, definitely no crumbs left on their seats!

The PMC sprang to our needs, giving us a well-deserved break,

And even sent a festive email, so all may partake.

I only have one thing to say, before I take flight,

“Good luck on final to all, and to all a good night!”

On Nov. 26th, 2015, the Cadet Drinking Mess, or more affectionately known as the “Snake Pit” hosted a gingerbread house making contest. Who won, you ask? Well, everyone of course!

The “contest” was designed to give Cadets a chance to relax, unwind, drink eggnog and build with friends. This year, the PMC, OCdt Eric Leclerc decided to put a twist into the holiday tradition. In his email, he invited the entire Cadet Wing to wear their pajamas (optional) to the event! 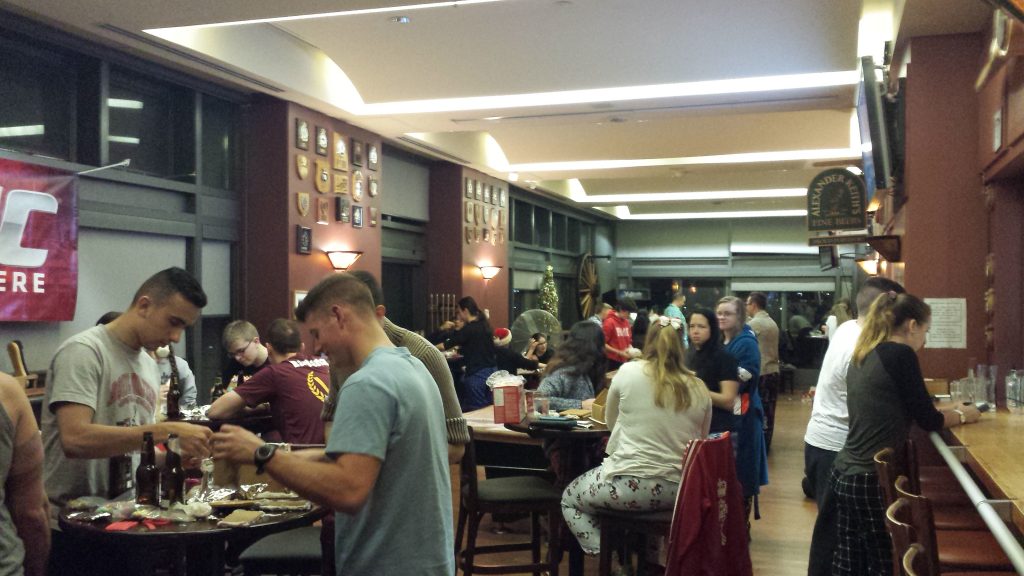 As with all other TGIT events at the College, it was well attended; with some friendly banter and challenges, the Cadets that were there had fun making the gingerbread houses. At the end of the night, when all was said and done, the houses were quickly broken down and demolished by Cadets with a sweet tooth for gingerbread topped with icing, fondant and sweets.

A big thank you to Robin Hillier the Mess Supervisor who took pictures that evening. She also was the one who went out on her own time to acquire all the gear required to make the night fun.