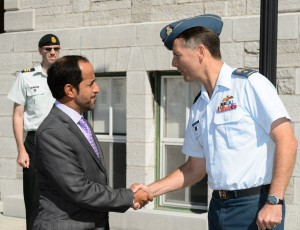 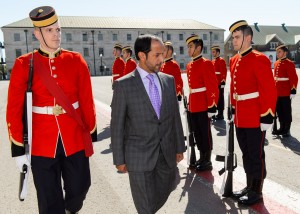 High ranking officials from the United Arab Emirates spent the best part of three days last week on and around the grounds of the peninsula last week. The guests displayed a high interest level in the RMCC approach to running a military college.

The guests were spotted at the Commandant’s Garden Party which added a special global engagement dimension to what was already a first class event. 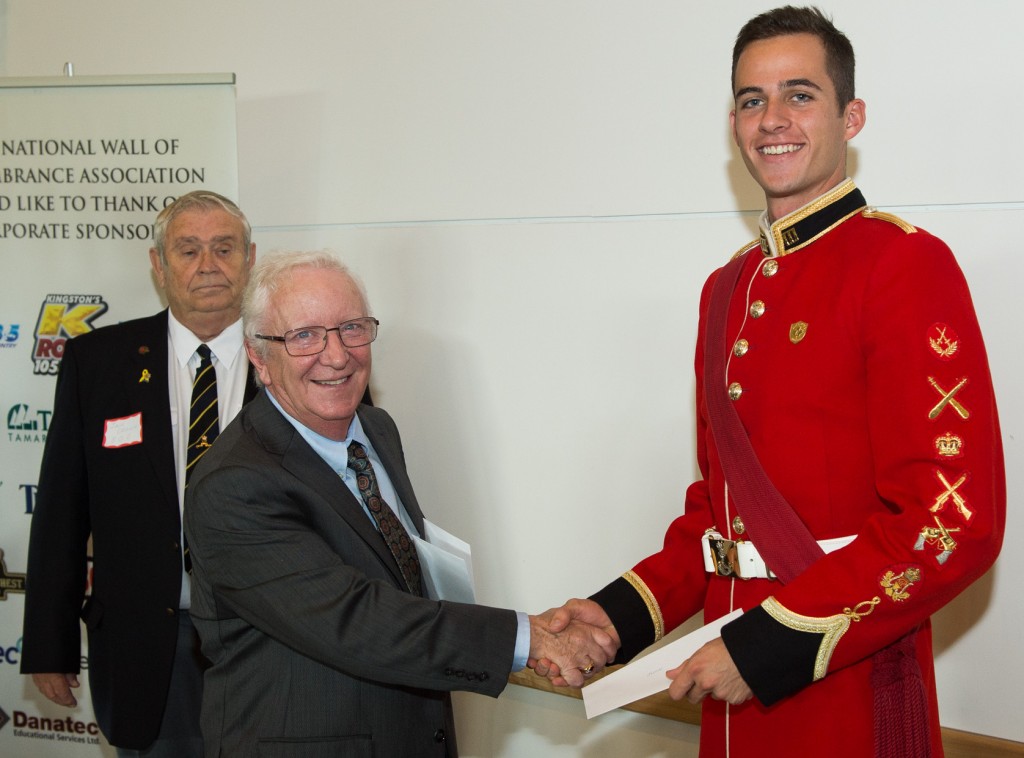 A national monument in Kingston honouring Canada’s fallen servicemen and women which is planned to be completed by November 2017 was in the local news last week.

The winners were announced and recognized at a nice ceremony this past Wednesday (10 Sep) at the C&E Museum, located within the confines of CFB Kingston.

26254 Officer Cadet (IV) Justin Hanlon took 3rd place in the contest, which attracted a large number of entries from the three post secondary institutions in Kingston: Queen’s University, Saint Lawrence College and our own Royal Military College of Canada.

The third place finish carried with it a cash prize of $2,000.

Elements of the designs from the three top finishers will be worked into the final WoR design.

Dogs in the Library! 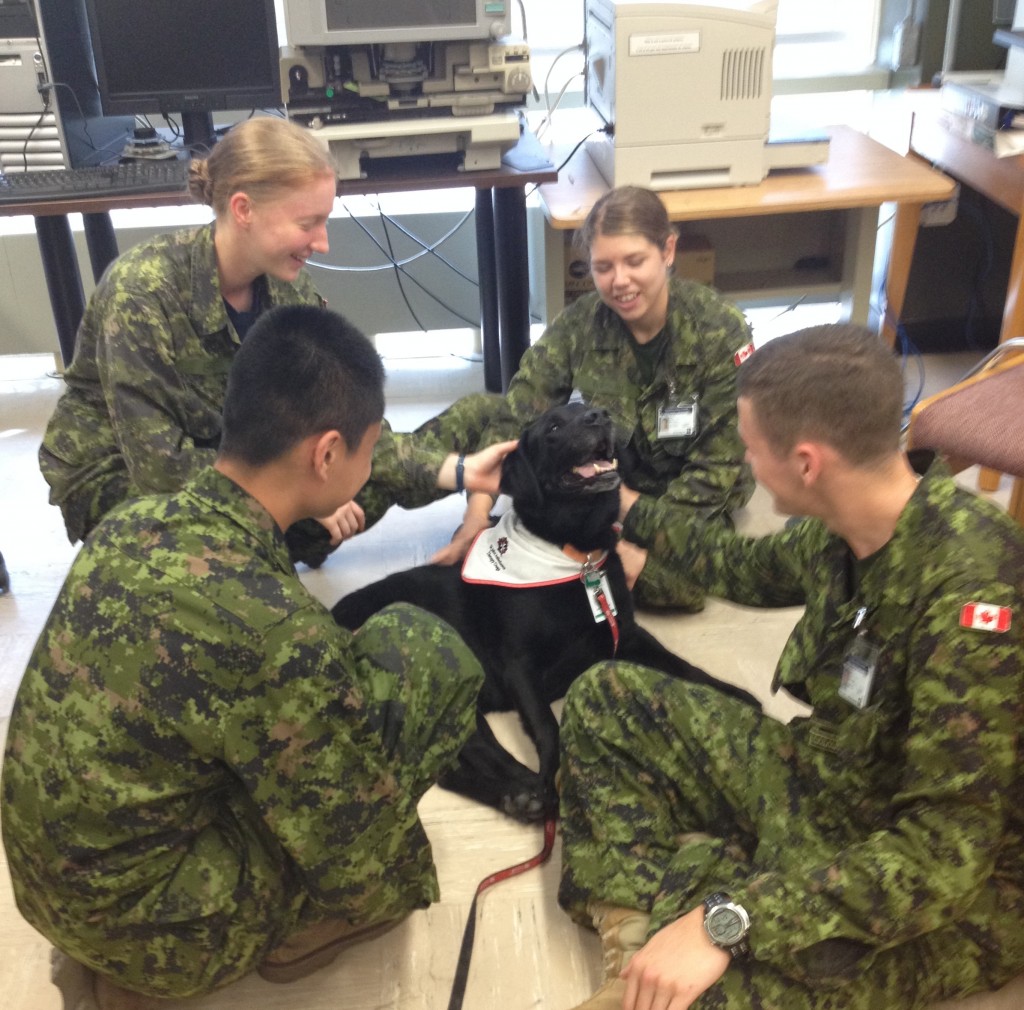 Caption: Last Wednesday at noon (9-11), the first year officer cadets of the Royal Military College had the opportunity to make some furry new friends! This event was put together by the RMCC Peer Assistance Group (PAG) and was an excellent opportunity for first year cadets to de-stress and enjoys some companionship from man (and woman’s) best friend! 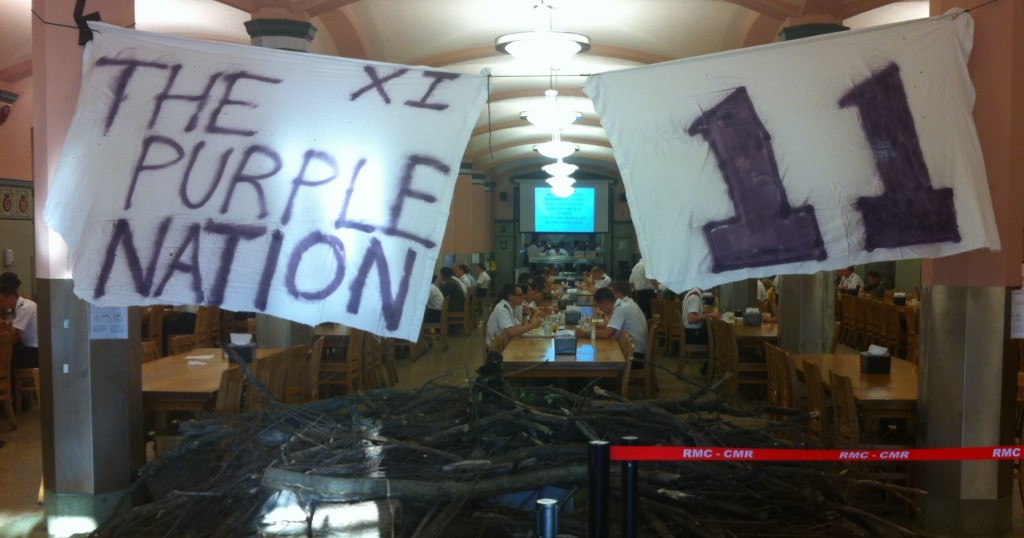 Caption: The beaver is a recurring symbol within the Canadian Forces, such as on the cap badges of the Royal 22nd Regiment and the Canadian Military Engineers. Luckily Cartier squadron has the honour of having this animal as its mascot. It is placed on our squadron logo, and joins us at many events throughout the year. Skylarks are a unique opportunity at RMC to demonstrate squadron pride and teamwork. With this in mind we came up with the idea to build a beaver dam in the cadet dining hall with a beaver placed on top to make our squadron visible within the college. This was accomplished with certain second years planning the project and first year were used for the manual labour, this whole process taking place at night.

Caption provided by: 27201 OCdt (II)Stéphane Prior  (Click on photos for better viewing) While most cadets were sleeping the night of September 7th, members of 8 Squadron were out and about preparing for what turned out to be an impressive Skylark on the DCdts. Under the leadership of CSL OCdt Van Veen, the second year cadets of 8 Squadron constructed a large cardboard tank out of boxes, multiple rolls of duct tape, and a laundry cart. In the midst of the night, the tank was secretly put into the office of Lieutenant-Colonel Popov. Participants in the Skylark made sure it was apparent who was behind the prank, decorating the tank in green paint and a large number “8”. To top it off, a stuffed bulldog was placed on top of the tank to act as the Squadron’s “ambassador” to the DCdts. As an armoured officer, LCol Popov welcomed 8 Squadron’s masterpiece into his office and proudly showed it off to his family and colleagues. Although Mackenzie Squadron does not do many Skylarks, they are notorious for pulling off memorable ones each and every year. It can be assured that the 8 Squadron Tank will certainly not be the last of this year. Two Squadron Early Off the Mark!

Friday morning dawned bright and red, especially on the interior of the mess hall. For the second time this week, Yeo Hall was hit with a midnight skylark – this time by mysterious supporters of 2 Squadron. Tables had been rearranged to form the Roman numeral, reinforced with tape and a cheerful DEUCE daubed on the floor in red. To top it all off, a Fighter banner was strung proudly across the entrance to the hot lines, winning smiles from more than a few first years.

Skylarks are one of the more elusive traditions of RMC. Throughout the year, squadrons will engage in friendly rivalries marked by these pranks, boosting morale and often gaining a chuckle from Training Wing staff. In past years, skylarks have ranged along everything from decorating Brucie (the statue of the ‘Model Cadet’ located on the pathways near Currie Hall) to shifting one of the monument tanks onto the parade square (typically the night before the College has to perform one) to even rebuilding an entire glider in the mess hall, wings arching over the heads of cadets at mealtimes. Legends of skylarks accompany every year; there’s a tale, for example, of a past year performing a midnight operation that left Mackenzie’s clocktower with Mickey Mouse hands. The more creative and outrageous the skylark, the better the year – and with the opening of 2, 7,8, & 11 Squadrons’ antics, the rest of the Wing had better get proving they’ve got cards to bring to the table. 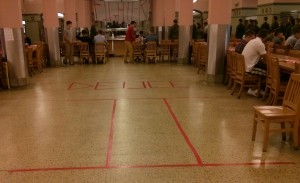 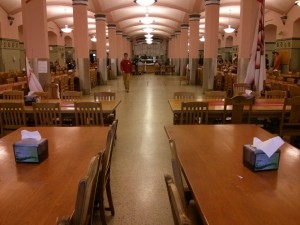 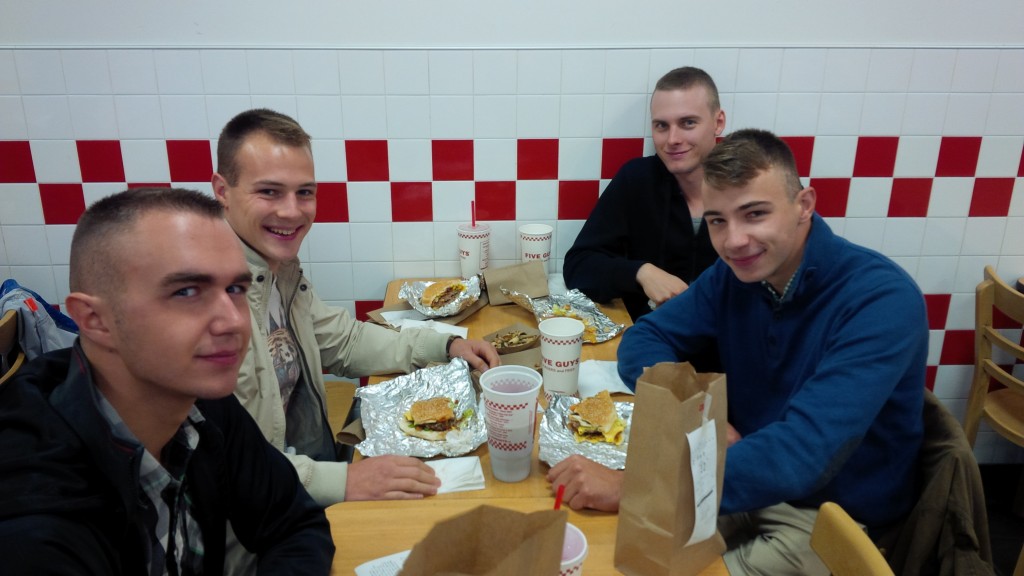 Foreign Students Get an Early Taste of Kingston

As with most years recently, the Royal Military College of Canada is hosting several exchange students from countries such as Germany, France and the United States of America.These students become members of the many different squadrons and teams around campus. As usual the officer and naval cadets of RMCC take time to show these students around the town and incorporate them into the bustling school life. From the best burgers in town to the historic sites, Kingston is nothing short of exciting things for these exchange students to see!