RMCC’s dramatist-in-residence Dr. Julie Salverson (photo left) gave a very well-received presentation 3 April in Currie Hall entitled “Drama, Imagination, and RMC.” The third person to hold the position of writer-in-residence initiated by Principal Sokolsky, the award-winning playwright talked affectionately about the cadets with whom she’s worked and played these past months. She helped facilitate the well-written, well-directed, well-performed and well-received play about RMC, Shakespeare in Scarlets. Having written plays about landmines, refugees, trauma, PTSD, HIV/AIDS, safe sex, gender-based violence, racism, the atomic bomb and the holocaust, as well as having worked with groups from the Red Cross and labour organizations to at-risk youth and women’s groups, Dr. Salverson proved a fascinating speaker indeed.

Julie regaled us with stories from her adventures here, at Queen’s, and elsewhere, bringing home the importance of telling one’s story as an act of empowerment and healing, especially for those in the military who’ve experienced trauma. Appropriately enough, the stage and podium belonged to her that evening. But before she took the stage, the stage was taken by surprise by a “Parallel Universe Tour” suddenly emerging stage left out of the ether, conducted by “transdimensionals”: the actors, hiding in the wings, who had performed in Shakespeare in Scarlets. Neither Julie nor the audience were quite prepared for such unexpected arrivals who had come to put on a little skit in her honour, and present her with a plaque commemorating her wonderful sojourn with us.

But the guy intro’ing Julie was quite prepared. That would be me, the sketchy script-writer for the sketch, a long-in-the-tooth prof in the awesome Department of English who has been inviting Dr. Salverson here since the early 90s to offer drama workshops to cadets. Why would anybody wanna do that? Of what value to people who may end up in theatre is the theatre?

I’ll let a Lieutenant-Colonel who did an MA under my supervision and would later go on to become Executive Director of the RMC Club Foundation answer that. According to 5851 LCol (ret) Barry Winfield, “These drama workshops are great! They should probably be mandatory for the whole military. They’re just what we need, and I never would have guessed.” Two legendary College figures, Maj. Boire and Lt.-Col. Delaney, have often taken me aside on battlefield tours and in the halls here to wise me up to the fact that a lot of what an officer does is acting. Sounds a bit like a prof’s job description…

Here’s some lines from the skit delivered, appropriately enough, by the director of Shakespeare in Scarlets, the very talented 25489 OCdt (IV) Chris Sulyma: “Whether you’re in theatre or in the theatre, timing is everything. You’ve got to be able to think on your feet and respond quickly, to be ready for anything, to keep a lot of stuff in your head you’ve planned out in advance but also be prepared to improvise on the spot if shit happens, as it does in theatre and in theatre. You have to know at all times where you’re standing and where everyone else around you is and what they’re expected to do and what you have to do if they don’t follow script. You need to work on yourself as well as work as a team.”

26239 OCdt (I) Amy Thomas, who dazzled folks with her musical numbers in Shakespeare in Scarlets, added this:

“Drama trains us in similar ways that military training does. RMCC’s very own Obi Wan and Morpheus, Maj. Boire and Lt.-Col. Delaney, are always saying half of what an officer does is act, to act confidently and convincingly to win over hearts and minds, to say the right thing at the right time to the right people to get the right results right away. So we may as well get a professional like Julie giving us acting lessons so we get it right right off.” 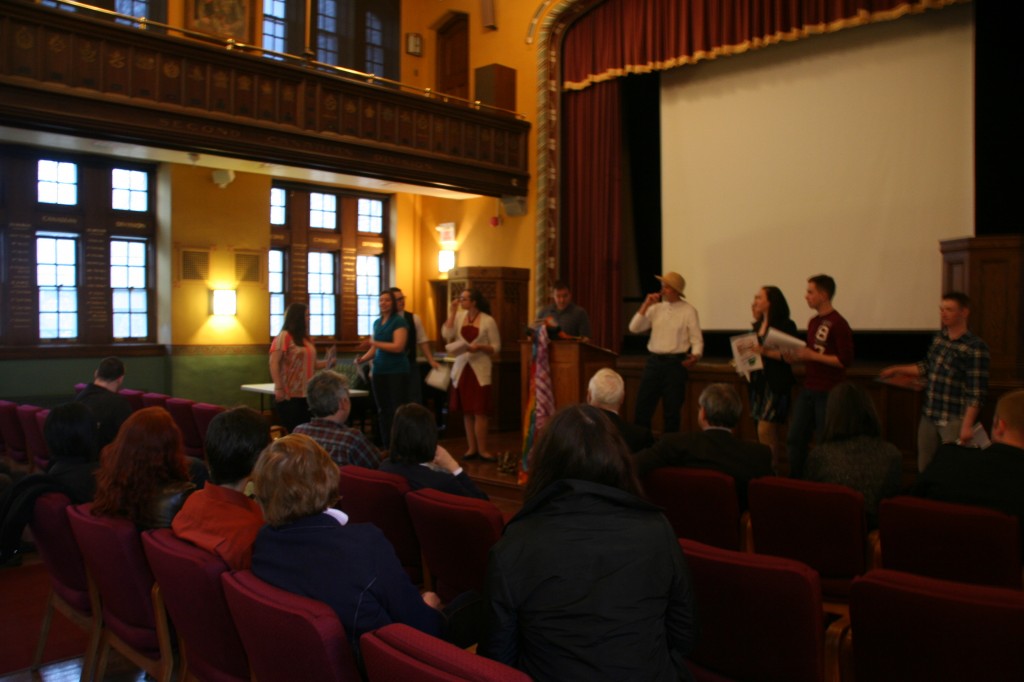 All this takes IMAGINATION, of course, what Margaret Atwood in Currie Hall in 2004 called the ability to imagine how other people think and feel, the very thing that reading and writing fiction and performing in plays trains you in. And, she added, such an ability is survival skill #1 in an increasingly shrinking global village. Also in Currie Hall, the same year, His Excellency John Ralston Saul, at the invitation of the Principal, had this to say to cadets and faculty: “Imagination and intuition, the poet’s stock-in-trade, are precisely the two faculties the Canadian military need to develop in the new millennium.” I am reminded, too, of Napoleon’s famous observation: “Imagination rules the world.” Not to mention Einstein: “Imagination is a sacred gift and the analytical mind a useful servant. We have put the servant in charge and forgotten the gift.”

Thanks to Principal Sokolsky who initiated the writer-in-residence position, and to Dean McDonough, English Dept. Head Steve Lukits, and tireless behind-the-scenes English professor Irwin Streight, Julie Salverson has reminded us these past months of the wisdom of such observations. Now, as they say in theatre and in the theatre, we must ACT upon it as key players.