Photo of the Week

The First Canadian Parachute Prize awarded to the Sandhurst team member having been voted the most outstanding by his peers was awarded to OCdt Jeremy Jobin (4th Year, Combat Engr). He received the trophy from Rick Mercer and RMCC Cmdt, BGen Al Meinzinger following the Sandhurst demonstration which was part of the 2014 Sunset Ceremony. (Jeremy’s dad is Daniel Jobin a former RRMC Athletic Director)

Where are they now? In his own words: 5586 Ian Mottershead

Claude Scilley In Conversation With Darren Cates, Director of Athletics 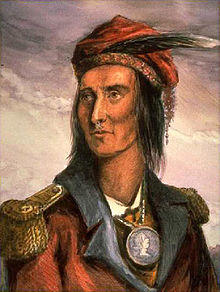 Morale building quotes from Tecumseh (described as being the “Wellington of the Indians” by General Sir Isaac Brock):

“Show respect to all people, but grovel to none.”

“A single twig breaks, but the bundle of twigs is strong.”

“When your time comes to die, be not like those whose hearts are filled with fear of death, so that when their time comes they weep and pray for a little more time to live their lives over again in a different way. Sing your death song, and die like a hero going home.”

“Let us form one body, one heart, and defend to the last warrior our country, our homes, our liberty, and the graves of our fathers.”

“From my tribe, I take nothing. I am the maker of my own fortune.”

Tecumseh (/tɛˈkʌmsə/; March 1768 – October 5, 1813) was a Native American leader of the Shawnee and a large tribal confederacy (known as Tecumseh’s Confederacy) which opposed the United States during Tecumseh’s War and the War of 1812. Tecumseh has become an iconic folk hero in American, Aboriginal and Canadian history.[1]

Tecumseh grew up in the Ohio Country during the American Revolutionary War and the Northwest Indian War, where he was constantly exposed to warfare.[2] With Americans continuing to encroach on Indian territory after the British ceded the Ohio Valley to the new United States in 1783, the Shawnee moved farther northwest. In 1808, they settled Prophetstown in present-day Indiana. With a vision of establishing an independent Native American nation east of the Mississippi under British protection, Tecumseh worked to recruit additional tribes to the confederacy from the southern United States.[2]

During the War of 1812, Tecumseh’s confederacy allied with the British in The Canadas (the collective name for the colonies of Upper Canada and Lower Canada), and helped in the capture of Fort Detroit. American forces killed Tecumseh in the Battle of the Thames, in October 1813. With his death, his confederation disintegrated. Some tribes simply stopped fighting. Accordingly, the British deserted their Indian allies at the peace conference that ended the War of 1812. As a result, the dream of an independent Indian state in the Midwest vanished, and American settlers took possession of all the territory south of the Great Lakes, driving the Indians west or into reservations.